Astrology Of The Game Of Thrones Finale 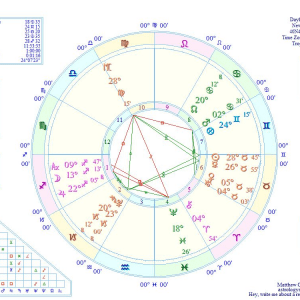 There will be spoilers at the end of this blog entry but don’t worry, I’ll give you plenty of warning first.

The Game of Thrones season finale airs this Sunday, with its first showing at 9 PM on the East Coast. As you can probably imagine, this chart reflects the enormous rating success the show will almost certainly be. But there are worrisome signs in this chart that indicates there may be problems.

Looking at the chart for when the show first airs (9 PM on the East Coast), which would essentially be the “birth chart” for how the public receives it, there are plenty of prominent signs of success. The Midheaven is at the apex of a Grand Trine involving the Sun and Mercury in Taurus and Saturn and Pluto in Capricorn. There is also a square to the Midheaven from Jupiter, but since it is Jupiter that is involved, things could be plenty worse.

If this was the birth chart of a newborn infant, an astrologer might well tell the parents that this kid will be a huge success in business. That’s great. I’m a huge fan of the show and I couldn’t be happier. But, the more I drill down into it, the more trouble I’m seeing. There are some potentially disturbing details in this chart.

Note that the Midheaven (which represents the larger public purpose in a birth chart) ruler is Mercury and it is closely conjunct the Sun. In a situation like this, astrologers call Mercury “combust,” and that is generally considered to be a difficult place for Mercury to be. Any planet that close to the Sun can get a little roasted. On top of that, the ruler of the Sun and Mercury here is Venus. Venus in this chart is closely conjunct Uranus. That could make for some pretty erratic or unpredictable results. The only other major aspect Venus is receiving is a sextile from Mars, which is in Cancer — which comes with its own issues.

What could all this mean in practical terms? It seems pretty unlikely that the finale of this incredibly popular show will be a bust in terms of the ratings. What I think is more likely is that the audience will be disgruntled with the results, as many have been since last week.

Now here’s where we get to the spoiler-y part of our program. If you would like to read more Game of Thrones based astrology articles, here are some links for you.

Astrology Of The Game Of Thrones Season 8 Premiere

And now here’s the usual bit that I run at the end of a blog entry. Keep scrolling past if you don’t mind some Game Of Thrones spoilers, up to and including last week’s episode….

Now, are all the Spoiler Averse gone? Good.

A lot of fans have been grumbling about this or that with this final season. Fans just love to complain, don’t they? But let’s be honest here: the ending to this long and complicated story was never going to end up making everyone happy, and that should be a given. Sure, maybe the end of the series seems a bit rushed, and based on the pace of the first three or four seasons, I can empathize at least a little with that. But what I’d like to address is the shock and horror many are feeling that Daenerys is now “The Mad Queen,” having succumbed to her family history of mental illness.

If you haven’t yet, CLICK HERE to read my previous blog entry about the mental health of Britney Spears. Part of what we consider “mad” is culturally based, and part of it is based on our own perceptions and expectations.

Dragons and magic and stuff are all cool, and that’s what makes the Fantasy genre so enjoyable. But it’s compelling and believable characters that make Fantasy (or fiction of any genre) work, and George R. R. Martin is (based on everything of his I’ve read) a damned good writer, and he understands this.

I don’t think Daenerys Targaryen is really “mad” in the “mentally ill” sense. She has always had high-minded ideals about liberating slaves and such, but she’s always been fixated on her “destiny” to rule the Seven Kingdoms, and she has never flinched from cruelty. She liberated the slaves of Meereen, but she had no qualms about having the former slave masters slaughtered needlessly, for example.

So, back to my point about compelling and believable characters. When you get down to it, a King or a Queen is basically a politician. If you tell me you’ve never seen a dragon, I’ll gladly believe you. But if you’re telling me that you’ve never seen a politician who came to power with high-minded rhetoric and the best of intentions, only to have that politician turn out to be a reactionary jerk interested only in his or her agenda, regardless of the cost to others?

Or, as those great 20th Century philosophers Megadeth put it…

You take a mortal man
And put him in control
Watch him become a god
Watch people’s heads a’roll
A’roll, a’ roll…