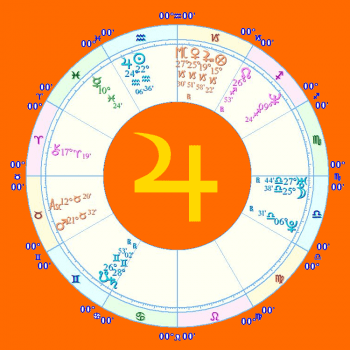 Performance artist Alex Jones has been found liable in three lawsuits by the parents of children who died at the Sandy Hook mass shooting. Jones, as you may recall, got a great deal of attention out of his claim the entire shooting incident was what is called a “false flag” operation.

For those of you unfamiliar with the term “false flag”: when it’s used in this context, it means that a mass shooting has been staged by the authorities as an excuse to take everyone’s guns away. Note that mass shootings happen plenty, and no one ever gets their guns “taken away.”

You may be surprised that this guilty verdict happened during Mr. Jones’ Jupiter Return. But when we have a closer look at his chart, maybe it’s not such a surprise after all.

Alex Jones was born on February 11th 1974, time unknown, in Dallas Texas. I have written about him here before, and you can click here and here for those articles.

Although Jupiter is generally considered to be the natural ruler of justice and legal matters. In Alex Jones’ birth chart there is a close Sun-Jupiter conjunction in late Aquarius, and it is square his Mars in Taurus.

A Sun-Jupiter conjunction in any Sign can give a person a bold and outgoing personality. Add a square from Mars to that combination, even when it isn’t in a debilitated placement like Taurus, and you get someone who’s occasionally going to be very loud and very outspoken and very bold. This is how Alex Jones makes his money.

Even if Jupiter is allegedly the planet of luck, no run of luck lasts forever. Having gained an audience from his lies, and sold more junk from his website, it appears that luck has run out for Jones.

This is why I tell clients that if they are going to go gambling, no matter how lucky their transits may appear or how they may feel? Never, ever walk into the casino with anything that you can’t afford to lose.

Many people have been (and are still are willing) to treat Alex Jones’ act as harmless tomfoolery. Mere entertainment. Parents of the Sandy Hook victims strongly disagree, and for good reason. The Conspiracy Theory that Jones helped spread led to harassment from many of his followers.

Imagine losing your child in a brutal and senseless massacre, and you keep being told by complete strangers that you are lying about it. Maybe your child didn’t even really exist in the first place. Alex Jones was the source of (and primary amplifier) for those views.

In conclusion: there’s a lot of downright crap out there on the internet. Be careful not to feed yourself too much of it. Eating too much crap has consequences.

The case will now go to a jury who will decide the money that Jones must pay. And this story isn’t over yet: he’s facing a similar civil suit in Connecticut.

I’m normally a pretty merciful guy, but frankly, I hope both settlements hit him hard enough to keep him out of the public eye permanently. Why? For exactly the same reason did a prescription of antibiotics says “keep taking until all the pills are gone” — because even if you’re starting to feel better, you don’t want that infection to come back. Ever.

Facebook Down: Much More Than Just Mercury Retrograde
archives most recent
More from Beliefnet and our partners
previous posts