Astrology And Twin Flames, Or Soul Mates, Or Whatever: The Great Auk 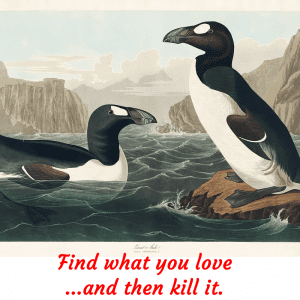 (This is Part Two of a series. For the Introduction, CLICK HERE)

What some people may not realize (or may not realize until it’s too late) about the search for their TFSMW is that any inspired quest can lead to unintended consequences. To illustrate my point, before we get down to the nitty-gritty of this series, let me introduce you to the true story of the Great Auk.

The Great Auk was once a common sight on the shorelines and islands of the North Atlantic, ranging from Great Britain to Canada. They were big flightless birds who were really of no harm to anyone except the fish and crustaceans they ate. Unfortunately for the Great Auk, they were also slow, meaty, delicious, had useful waterproof feathers, and were quite easy to kill. It didn’t help them either that they had no natural fear of humans. This made them an ideal source of fresh meat for sailors traveling back and forth between Europe and North America.

As you can imagine, as more and more ships sailed that route starting in the 1500s, the population of the Great Auk began to decline. By the 1600s, some soon became aware that the population of the Great Auk was dwindling. So, some protections were put in place. If you were to kill one or steal its eggs, you could theoretically receive a whipping. That is, if there were any witnesses (or if your fellow sailors decided to rat you out for it). This, as you can imagine, did not happen very often.

If you think that making a valued commodity illegal will decrease the demand and or price for it? Let me introduce you to “free market laissez-faire capitalism.” If you’re already familiar with that concept, you can probably guess what happened next. The Great Auk soon became a prized collector’s item. Not only were the remaining birds still easy to catch and still delicious but now the remains, stuffed and mounted, could fetch a good price from a collector. Imagine winning a free meal from KFC, then being able to sell the leftover bones and scraps for a significant profit.

By the early 1800s many believed the Great Auk to be extinct. What few sightings there were naturally got attention, and of course as the birds began to vanish they became more valuable than ever to those who wanted one as a curio to amuse their friends with. But soon even those rare survivors began to vanish. The last Great Auk sighted in Britain died in July of 1840. It was captured by three men who, believing it to be a witch that was causing a storm, beat it to death with a stick.

The last two Great Auks, a mating pair, were killed in Iceland on the 3rd of June, 1844…. when the Moon was at the same degrees where the Saturn-Pluto conjunction is happening now.Two Icelandic sailors killed them at the request of a merchant who wanted specimens. Jón Brandsson and Sigurður Ísleifsson strangled them with little resistance.

History does not record what the motive (if any) there was for the last Great Auk egg being crushed underfoot in the process.

“Wait a minute!” many of you are likely thinking right about now. “That story was sad and cruel, and you barely gave us any astrology!”

To those of you thinking along those lines: you are quite right, and I apologize. I did it to set the tone for my next blog entry in this series, in which we delve into how badly burned some have gotten searching for their Twin Flame. This is a story I believe you need to hear, so drop by next time, okay?

Astrology And Twin Flames, Or Soul Mates, Or Whatever: An Introductory Q&A
archives most recent
More from Beliefnet and our partners
previous posts