Astrology, The 2022 Nova, And The End Of The World 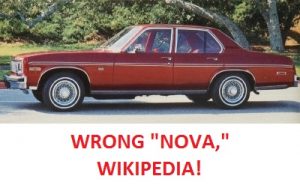 Good news, science fans! There will be a nova in 2022 that will help us all learn more about the Universe!

Bad news, astrology fans! There will be a whole bunch of nonsense coming your way about it in the next few years!

Astronomers have determined that we will be seeing a “nova” (stellar explosion) from Earth in 2022, and it is predicted that it will be bright enough to be one of the brightest stars in our night sky for six months or so. Novas aren’t the sort of thing we can usually predict this far in advance, but the star in question (which goes by the melodic name of KIC 9832227) is a special case. It isn’t going to be the usual “dying star goes out with a bang” nova. KIC 9832227 is what’s called a “contact binary,” which means it’s two stars orbiting each other so closely that they are essentially rubbing up against each other. In 2022 the two are expected to finally crash into each other, producing a huge explosion (okay, technically the nova actually happened about 1800 years ago, and the light will reach us in 2022. You know what I mean).

This is the sort of thing that will get more attention as 2022 approaches, and will undoubtedly get as much needless attention from certain dark corners of the astrological community as the August 1999 Eclipse that Nostradamus spoke about (that caused The End Of The World) or every new major comet that comes near Earth (which will cause The End Of The World). This reminds me of the cyclical nature of recurring fake astrology news stories about “Nibiru” (which just plain old does not exist), or that infuriating thing about Ophiuchus and/or how “your Sign has changed!”

(A suggestion for the next time this Sign-change “news” story shows up: Ophiuchus is the constellation of “the snake handler.” Snakes are reptiles. The study of reptiles is “herpetology.” Therefore, next time this crap invades the public consciousness, I suggest all astrologers everywhere call or write all their clients born between November 29 and December 17 and say “Congratulations! You are now a Herpes!” The combined outrage of those former Sagittarians will hopefully be enough to kill this “13th Sign” crap off once and for all.)

In fact, Nova Mania has already started. Rabbi Yosef Berger has announced that this nova relates to a prophesy in the Book Of Numbers, and heralds the arrival of The Messiah. This is of course excellent news for everyone whose Messiah hasn’t arrived and/or returned yet. Someone should point out to Rabbi Berger that the much-brighter supernova of 1054 AD also heralded the arrival of — wait, which Messiah showed up in 1054 AD? Oh right… Lý Thánh Tông, (the third king of Vietnam’s Lý dynasty), took power that year. And then of course, the world ended.

So, in conclusion: don’t freak out over the 2022 Nova (which in Zodiac terms, according to my probably-terrible math, will occur in the first half of Aquarius). Astrologically speaking, I’m convinced it’s going to be no big deal, the world won’t end, and whatever terrible things may happen that year can all be accurately blamed on something else.

…And whatever you do, don’t send your money to Madame Spasma, no matter how may times she tells you that this nova is going to ruin your life.

Astrology, Death, And Colo The Gorilla
archives most recent
More from Beliefnet and our partners
previous posts