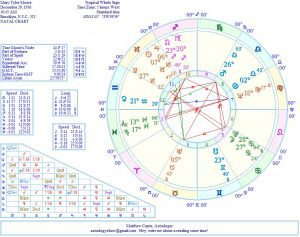 Actress Mary Tyler Moore has died at the age of 80.

If you’ve read much about her by now, you’ll have seen plenty of things about how the Dick Van Dyke show was (and still is) an absolute classic of the genre, and how The Mary Tyler Moore show was groundbreaking in many ways. You’ve probably seen some things about how she struggled with alcoholism and diabetes, or about how talented a dancer she was or how great she was on stage.

All of this is true, of course, but when I look at her birth chart that’s not what jumps out at me, at first. I believe that Mary Tyler Moore’s birth chart made her uniquely placed to make her something that the entire world needed: the kinder, gentler face of feminism.

Yes, feminism. Take it away, Merriam-Webster:

1: the theory of the political, economic, and social equality of the sexes

If you can’t get behind that basic notion, you and I may have little else to discuss here.

Back in the 1960s and 1970s, when the world was starting to get used to the idea that women should receive equal protection under the law, should get paid the same as a man for doing the same job, and other such wild notions, there were a lot of Warrior Women on the TV, ready to terrify anyone whose identity was heavily invested in the status quo: creatures like Steinems and Abzugs and Fondas and Davises and other such roaming menaces to modern culture’s precious and sacred cojones.

Mary Tyler Moore never burned her bra or screamed at the TV camera or got arrested at a protest. So, how is she such an important figure in 20th Century Women’s Rights? 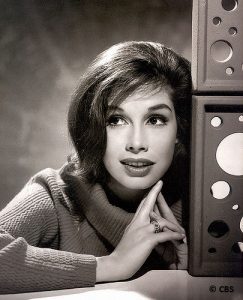 Look at that chart at the top of this blog entry. Note the Ascendant. Now look at this picture of Mary and see how the Ascendant — your physical appearance, your mannerisms, how you come across to others — manifested itself.

Mary Tyler Moore had all the big dewy-eyed charm, sensitivity, and humility of Pisces Rising. Her Ascendant took aspects from both the traditional ruler (Jupiter) and the modern ruler (Neptune) of its Sign. Any Ascendant taking a pleasant aspect from its ruler is likely to be a good looking Ascendant. Add the impeccable bone structure of Saturn on the Ascendant, and you get a Mary Tyler Moore.

In a time where the status quo was being shaken by an uprising, Mary Tyler Moore came into people’s homes every week and showed them a woman who was strong and capable, held her own at work, and who occasionally pursued relationships but was never consumed by that chase nor lost without a partner. She was well-loved by millions, and she was exactly what feminism needed at the time. She embodied what women were fighting for without once needing to actually fight. She didn’t fight on the front lines — she just lived like she had won the battle until we agreed with her.

There is a line from Damn It Feels Good To Be A Gangsta by The Geto Boys that perfectly embodies this quality, but due to Beliefnet’s language constraints (and because you might be reading this at work), I won’t repeat here. Instead, I’ll just mention that although every revolution requires a lot of noise to get started and to keep rolling, it’s the simple and relatable humanity of those who are being fought for that ultimately wins people over. And there she is. As The Mary Tyler Moore Show theme song put it:

How will you make it on your own?
This world is awfully big, girl this time you’re all alone
But it’s time you started living
It’s time you let someone else do some giving…

Now: add “funny” to that mix, and how could feminism possibly lose?

Once you recognize the inherently human qualities in your opponents, it’s a lot harder to deny them what they’re fighting you for.

Astrology, The 2022 Nova, And The End Of The World
archives most recent
More from Beliefnet and our partners
previous posts