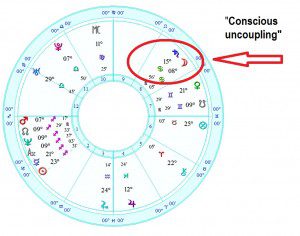 “I asked my dad once, ‘How did you and mom stay married for 33 years?’ And he said, ‘Well, we never wanted to get divorced at the same time’. And I think that’s what happens. … When two people throw in the towel at the same time, then you break up, but if one person’s saying, ‘come on, we can do this,’ you carry on.”

The approaching Cardinal Grand Cross has claimed a celebrity victim: the marriage of Gwyneth Paltrow and Chris Martin.

Before we get started on that though, a bit of a personal note: As a good and decent human being, I am filled with nothing but love and light for all of humanity. But I’ve got to confess: Gwyneth Paltrow really annoys me. She annoys a lot of you out there too. She is in many ways a prime example of one of those people who was born on third base and thinks that they invented baseball. That, and I admit Coldplay can be kind of whiny themselves too sometimes.

Now that I’ve had a look at the transits leading to her break up — oh, sorry, “conscious uncoupling,” because Gwyneth Paltrow is just like you and me (except she’s better, healthier, richer, skinnier, and more sophisticated than you and I are — but as a Libra, she’s soooo sweet about it)  with Chris Martin, I am feeling more empathy. See? Astrology: it can lead to personal growth.

We are fortunate to have confirmed times of birth for both parties. So above and beyond the usual synastry (which is what we call the comparison of two needle charts to each other for compatibility) we can also look at the composite chart, which is (essentially) a third chart that is produced when we add the positions of the various planets in two charts together and then divide them by two. When I have taught astrology, I have often loudly warned my students to never give the composite chart precedence over the synastry. Nonetheless, the composite chart does tell a story, and in the case of Paltrow and Martin, it is particularly instructive.

Looking at Gwyneth’s chart (September 27 1972, 5:25 PM, Los Angeles California), the astrological cause of the breakup is pretty blatant. The Cardinal Grand Cross is affecting the cardinal signs and will peaking at around 13°. Gwyneth has Virgo on her seventh house cusp, which rules committed relationships. Virgo is ruled by Mercury. Her Mercury is in her seventh house at 11° Libra… Pluto is currently square that point, as is Jupiter, and Uranus is opposite it, all within 2° or less of exact. When Mars in Libra hits 13° next month, we can probably expect some flare-ups in this otherwise peaceful separation. That, and transiting Saturn square natal Venus is a classic for bad times in one’s love life.  Reading astrological transits can be difficult, but this one is a relative no-brainer.

Astrologically, the situation with Chris is a little less obvious, but still pretty clear. Born March 2, 1977, 5:52 PM, Exeter UK, he is currently undergoing his Pluto Square, where Pluto is at a 90° angle to where it was when he was born. Regardless of the details of your chart, the Pluto Square is a difficult time. It represents a challenge to your most deeply held values and beliefs… And most of us don’t have to go through our Pluto Square when there is a Cardinal Grand Cross piling up on top of it.

(A special note to those of you born September 1976-December 1978: you’re having your Pluto Square too. Pay attention, and brace yourself for impact in the next couple of months.)
Complicating matters for Chris during this time is the fact that there is a lunar eclipse happening next month, and it is happening right on top of his North Node/South Node axis. Perhaps more than any other placement in the birth chart, the nodes can be thought of as “ambassadors of karma,” in the “past life/what you’re supposed to do this life” sense. Regardless of how well or how poorly Chris may be taking the break up now, I expect next month will be more difficult for him then this month is. That, and break-ups are never fun, but when you’re a sensitive lil’ Pisces like he is, they’re arguably worse.

The composite chart of these two, and the transits to it, are particularly instructive. Again, my warning that composite charts must never take precedence over how the two people’s charts in a relationship actually relate to each other. But the composite can tell us a lot about the nature of a relationship and the connection between two people. The composite here is noteworthy for a square between Moon in Cancer and Pluto in Libra, with Pluto being in the 11th house of friendship, and the Moon being in the 8th house of sexual relationships. All of these placements are being agitated by the Cardinal Grand Cross, and just to complicate matters, that composite Moon is strong in the Sign it rules, conjunct a Saturn that is weakened by that Sign placement. Saturn brings structure and order, and gives the ability to survive difficulties, but in a sense (in this case) the Moon’s moods are always going to be stronger then that sense of structure. Regardless of the fact that there are numerous things in this synastry between Chris and Gwyneth that recommends the relationship, I can’t help but think that the composite chart casts a shadow of doom over the whole thing.

Besides, who’d want to be married forever to someone who says stuff like “I would rather die than let my kid eat Cup-a-Soup” or sells $10 porcelain fortune cookies on her web site because only a peasant would serve REAL fortune cookies?

Want to learn the mysteries of your Vedic Astrology in an easy, fun way for one low price? Class starts March 25th… CLICK HERE for details and the link to a free preview! 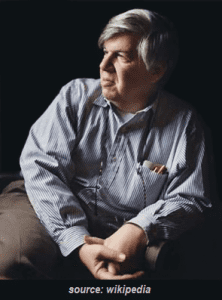 Is Astrology A Science?
archives most recent
More from Beliefnet and our partners
previous posts