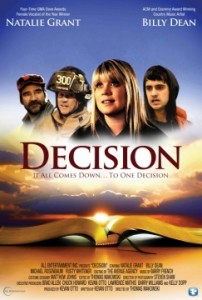 On Sunday night (October 16), the Gospel Music Channel (GMC) will debut it’s made-for-television movie Decision. The film will air twice that night at 7 and 9 p.m., Eastern. You can check out the trailer and get additional broadcast information by clicking HERE.

The film stars Dove-Award winning recording artist Natalie Grant in her first ever on-screen acting performance. Whole Notes caught up with Grant earlier this week to discuss the movie:

Chad Bonham: How did the opportunity to star in Decision come about?

Natalie Grant: I didn’t have acting in a movie on my bucket list. But when they asked I thought, “That might be cool.” It’s a different challenge. I’ve never done it before. I may be completely terrible at it, but I might as well try it. I don’t know what on earth made me think it would be a good idea to do that when I was eight and a half months pregnant…It was a lot of fun and everybody was very kind to me. I’ve never even taken a drama class before, but I had a bunch of great coaches.

Bonham: Were you able to pull from your experience as a performing artist?

Grant: The truth is, when you are an artist, there’s an element of acting to that. Of course, part of the kind of artistry that I do, or that any singer/songwriter does, is honest and real. I don’t mean that it’s acting from that standpoint, but a lot of times the person you see on stage is so different from their actual personality. Just knowing how to “be on” and how to perform helped me a lot. Oftentimes when you meet an actor, you find they can sing or maybe they had aspirations to do that at some point. It’s probably pretty common. It also helped to think about my character and her lot in life. I was pregnant and the character was pregnant. She had just lost her spouse and was trying to figure out how to deal with her teenage son, and the fact that she was about to have another baby and nobody to help her. I think it was easy to think about what I would be like in that situation and draw from that.

Bonham: But other than sharing the experience of pregnancy, would you say you had to stretch yourself quite a bit to put yourself in your character’s shoes?

Grant: Very much so. But I think being pregnant helped me draw on anything emotional about anything, (laughs) because I was emotional anyway. I tried to put myself in that person’s position. There I was pregnant and imagining the thought of my husband dying before I even gave birth to our child. It was definitely a stretch for me. I have an older sister that is a single parent so I think that helped me a little bit to have watched her walk through the difficulty she had raising two kids by herself.

Bonham: So they never had bring you tears in a bottle?

Grant: No they did not (laughs). I’m not even sure if I cried in the movie. My manager tells me I did.

Bonham: What about the story captured your imagination?

Grant: It’s a strong family values film. It was a very real thing. It showed a kid that was angry at God, and angry at his life. He lost his dad who was his best friend. That part of it, people can identify with, especially because in life a lot of times you have more questions than answers. That part of it will resonate with people…I’m not going to try to tell you it’s got this deep, life-changing script but I was drawn to it because I wanted to be part of something I’d never done before and be part of something that was a family values film that showed the struggles and the anger but how faith wins out in the end.

Bonham: Did you enjoy it enough to consider doing something like this again in the future?

Grant: I think so. It would depend on the script. Hopefully I would never do it again pregnant (laughs). I think I would do it again if the opportunity presented itself. It was a lot of fun and it was a completely different kind of artistic exercise than I’d ever done before. I really enjoyed it.

Whole Notes will be posting more from this interview in the near future. To keep up with the latest from Natalie Grant, visit her official website by clicking HERE.