Husband, 77, Takes to the Streets to Find Wife of 56 years a Kidney (video) 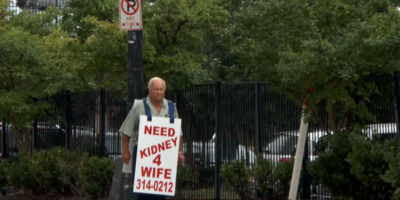 A 77-year-old US man has taken a drastic approach to finding a kidney for his wife, taking to the streets wearing a sandwich board sign pleading for a stranger to donate. Larry Swilling’s wife Jimmy Sue was born with only one kidney which started developing problems after she had her first child and is now failing.

The South Carolina resident initially thought he could donate one of his kidneys but soon found out his blood type did not match his wife.

But Mr Swilling refused to give up and instead decided to reach out to the public for help — first hitting the streets in his hometown and surroundings towns in September.

The 77-year-old cut an unusual figure walking alongside roads and highways wearing a sign saying “Need kidney 4 wife” and it was not long before his plight made headlines in the US.

He has since received hundreds of calls from people offering to be tested but so far has not found a match.

But with the donor waiting listing being two years long Mr Swilling said he will not stop searching.

His wife said she is just amazed at the response to her husband’s efforts and the awareness he has raised.

“If I get a kidney fine, if I don’t I hope someone else does,” she said.

Larry Swilling, 78, a South Carolina man who walked the streets with a sign asking strangers to donate a kidney to his ailing wife, has finally found a match.

Larry’s wife, Jimmie Sue Swilling, 76, first learned she was born with only one kidney when they tried to have children. Despite doctor’s doubts that she would be able to conceive, Jimmie Sue gave birth to three children. But the possibility of needing a future transplant was never far from her mind.

Last September, doctors confirmed Jimmie Sue’s worst fears: She was going into kidney failure and would need a transplant. She was put on a donor waiting list; however, Larry, a truck driver and former volunteer fireman, worried that his wife of nearly 58 years wouldn’t survive before a donor was found.  “Before we went to bed that night, Jimmie Sue said, ‘What are we going to do?’ I said, ‘I don’t know, but I will figure something out,’” Larry told Yahoo Shine. “The answer came to me in the middle of the night.”

The next morning, without telling his wife, Larry purchased materials for a sign and made a sandwich board that read “Need kidney 4 wife.”

CBS News After getting off work early that day, Larry pounded the pavement in his hometown of Anderson, South Carolina, wearing the sandwich board. “I walked 15 miles in 97-degree heat with torn cartilage in my knee,” said Larry. “People offered me money, but I said, ‘I don’t want your money; I want your kidney.’ I was prepared to walk to Washington if I had to.” When a local news team stopped Larry for an interview, his story went viral — much to his surprise, and Jimmie Sue’s.

After the news segment aired, Larry and Jimmie Sue’s luck seemed to turn; People from all over the world who wanted to donate  called Larry. He says he received close to 2,000 calls after that walk and was so overwhelmed by the responses that he arranged to forward them to the Medical University of South Carolina, where Jimmie Sue was receiving treatment. “If anything, we were just happy that our story had motivated people to donate,” said Larry.

A few days later, Larry set out again, this time walking an astonishing 54 miles in one day. For extra measure, he made a few more signs and stuck them to his pickup truck.

“I heard about my dad’s plan when my mother called me and said, ‘Your dad is on the street,’” Larry Jr. told Yahoo Shine. “That day, I brought him water because it was so hot. He’s always been very resourceful. One year, when he lost his job before Christmas, he made sure we still had lots of presents, like the other kids.”

Although the Swilling’s have had no shortage of offers, they needed a donor with O-positive blood, and no one has matched — until now. “A 41-year-old woman from Virginia Beach recently read an article about my sign online and offered her kidney,” said Larry. “Luckily, it was a match.” On Tuesday, Jimmie Sue and the donor will undergo a few more tests. The implant will take place on Wednesday. The couple is also looking forward to meeting Jimmie Sue’s donor next week.

“I have my wife and that’s the most important thing,” said Larry. “And I’m amazed by the generosity of strangers.”

Video your US Senators and US Rep must see before committing USA's help to Syrian rebels!
archives most recent
More from Beliefnet and our partners
previous posts