Identified – Mystery Priest Showed Up at a Crash Scene, then Vanished

While some had hoped for supernatural intervention, it seems an entirely human conclusion has come to fruition. Still, the faithful would argue that God’s hand was in this gesture, regardless of the channel that was used to help usher in calm at the scene.

The mystery priest who recently showed up at a crash site, anointed a victim and then vanished has been identified — and he came forward by posting his identity in the comments section of a Catholic news site. The story began on Aug. 4, after Aaron Smith, 26, struck Katie Lentz, 19, in a head-on car crash. In the days that followed, the tale of a faith leader who showed up at the scene, anointed the young woman and then subsequently vanished went viral.

But now the individual, who brought calm upon the situation and who rescue workers have been hoping to find and thank, has been found. A press release provided to TheBlaze from the Diocese of Jefferson County confirmed that the Rev. Patrick Dowling, one of the priests who works with the diocese, is the individual whom they have been seeking.

While some assumed the mystery priest was an angel or a deceased Catholic saint coming back to shower goodwill upon mankind, it seems these individuals’ theories were incorrect; it was, in fact, a caring bystander and faith leader who took the time to help a young woman in crisis.

The statement, provided to TheBlaze by spokesperson Deacon Dan Joyce, head of communications for the diocese, reads (Joyce also confirmed these details with TheBlaze, noting that he has spoken with the priest about what unfolded):

The Diocese of Jefferson City has identified the priest who assisted at the site of the Sunday morning, August 4, 2013 auto accident near Center, Mo. He is Rev. Patrick Dowling, a priest of the Jefferson City Diocese. Fr. Dowling was travelling Hwy 19 between Mass assignments that morning in northern and central Missouri.

Fr. Dowling said that he is pleased that he was able to help by performing his ministry and noted that that he was just one of many who responded to assist the victim at the accident. He and the Diocese wish to acknowledge and thank the first responders, medical team and law enforcement personnel for their efforts that morning in aid of the young woman injured in the accident.

Fr. Dowling, a native of Kilkenny, Ireland, was ordained a priest of the Diocese of Jefferson City, Mo., in 1982. He has served at parishes in Moberly, Monroe City, Indian Creek, Milan, Unionville and Eldon, Mo., and in the diocese’s mission parishes in Marcona and Nasca, Peru.

He is currently serving in prison ministry and in parish ministry to Spanish-speaking Catholics.

Rather than coming forward in a more ceremonial or traditional way, on Friday evening, Dowling chose to post a message in the comments section of an article on a Catholic news site — one that went widely unnoticed until this afternoon.

Posting on an article written in the National Catholic Register about the incident and the search for the mystery hero, the priest detailed what unfolded. He wrote that on his way home from a Mass — one during which he was filling in for a sick priest — he arrived at the crash scene. With authorities re-routing traffic (TheBlaze previously reported that the scene was shut down for a one-fourth of a mile radius), he waited until it was possible to get closer.

“I parked behind a large vehicle about 150 yards from the scene. I asked the Sheriff’s permission and approached the scene of the accident,” Dowling said. “I absolved and anointed Katie, and, at her request, prayed that her leg would not hurt. Then I stepped aside to where some rescue personnel and the pilot were waiting, and prayed the rosary silently.”

Then, he left the scene just as the helicopter was about to leave. Interestingly, he notes that he gave his name to one of the emergency personnel, but somehow it was seemingly not passed on. Rather than taking all the glory, the priest went on to thank all of these workers, noting that they deserve accolades.

“God has blessed your work. I hope the credit goes where it is due,” he said of emergency workers at the scene.

I had Mass in Ewing MO as the regular priest was sick. As I was returning, I arrived at the scene. The authorities were redirecting traffic. I waited till it was possible to drive up closer. I parked behind a large vehicle about 150 yards from the scene. I asked the Sheriff’s permission and approached the scene of the accident. I absolved and anointed Katie, and, at her request, prayed that her leg would not hurt. Then I stepped aside to where some rescue personnel and the pilot were waiting, and prayed the rosary silently. I left when the helicopter was about to take off, and before I got to my car it was on its way to Quincy. I was amazed at the calmness of the two Highway patrol men. The sergeant was completely in control, amazingly calm. Everybody worked as harmoniously as a Swiss watch despite the critical nature of the scene. I gave my name to one of the authorities, perhaps to the sergeant of Highway Patrol, explaining that I was returning having celebrated Mass at Ewing. It was the sergeant who, at the Sheriff’s request, gave me Katie’s name as I was leaving, so I could visit her in hospital—I assumed she would be taken to Columbia. I think there may have been angels there too and, in this context, I congratulate the fire team from New London and Hannibal, the Sheriff/deputies of Ralls County, the Highway Patrol personnel, the helicopter team, the nurses and all who worked so professionally. God has blessed your work. I hope the credit goes where it is due.

While some had hoped for supernatural intervention, it seems an entirely human conclusion has come to fruition. Still, the faithful would argue that God’s hand was in this gesture, regardless of the channel that was used to help usher in calm at the scene.

This is a breaking news story. Stay tuned for updates. 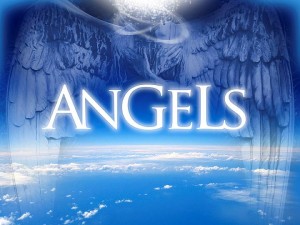 Calvin’s Commentary: Humans do not become angels when they die. Angels are created creatures, created by God, who were never born like humans are. Angels are mentioned throughout the Bible and are not flesh and blood (like human beings).  Angels are spiritual beings. They are called “messengers” of God and created by Him (Psalm 148). Job (the oldest book in the Bible) informs us that angels were present at the creation of the world.  No human was present because Adam was not made by God as yet.  Adam and Eve were the last creations of God in the Creation Account in Genesis chapters 1-3.  Angels were present before mankind was created.  Angels at seeing the awesome work of God’s hands they “shouted for joy” (Job 38:7). Regarding God’s Hand being at this crash site, of course He was! God is omnipresent and God cares about us human beings.  As the King James Bible says, “Keep me as the apple of the eye, hide me under the shadow of thy wings.” [Psalm 17:8] — Definition of OMNIPRESENT: present in all places at all times.  — Read Psalm 139: God sees us whereever we are and He knows exactly what we are doing.  — Read Jeremiah 29:11 – For I know the thoughts that I think toward you, saith the LORD, thoughts of peace, and not of evil, to give you an expected end.  ▬ Donna Calvin ▬ Monday, August 12, 2013

Are you smarter than an 8th grader from 1912?
archives most recent
More from Beliefnet and our partners
previous posts