Calvin’s Commentary: Looking at the example below of just a miniscule section of the test given to students in Kentucky in 1912 illuminates just how unintelligent today’s high-minded, unionized (National Education Association-NEA) tenured, Marxist-loving, intellectually brainwashed, hate-America-first educrats/robots, the public school teachers and college professors are today. They were taught (and therefore teach) that the past generations, our great-great-great grandparents and their ideas, including the U.S. Constitution and the Holy Bible, are outdated and irrelevant for today’s immoral, godless pop culture, but are throughly taught how to put condoms on cucumbers and to embrace homosexuality, but our students today cannot find Canada on a map, name the three branches of government, spell or do simple algebra. Watching Jay Leno’s Jaywalking segments, it is pathetic to see just how dumbed-down the average citizen is, including those who have (or are attending college) and worst of all, so many of those are studying to be TEACHERS! God help America. It’s little wonder we have a crop of stupids voting for the idiots they choose to represent them in local elections all the way to DC. Not only that, have you continued to notice how the south (states like Kentucky) are continually denigrated by the left-winged brainiacs of Hollyweird? Why? I believe it is because the southland is called the Bible Belt and the Marxist socialists in today’s left-leaning government and the biased media hate God and Christianity. And this is the result of that intellectual superiority … just like God’s Word states clearly …

[Romans 1:22] Professing themselves to be wise, they became fools,

P.S. Attention: All Christian grandparents, parents!  If you’re children are in public government schools, get them out. Homeschool them!  Because they are being brainwashed to question their sexuality and sexual preference of the opposite sex, to hate God, your morals, your ideals, to accept the criminalization of Christianity, to accept the New World Order, to pay homage to Muslims/Sharia Law, and to disrespect the America you grew up in.

1912 eighth grade exam: Pass or fail, century-old exam is a telling one 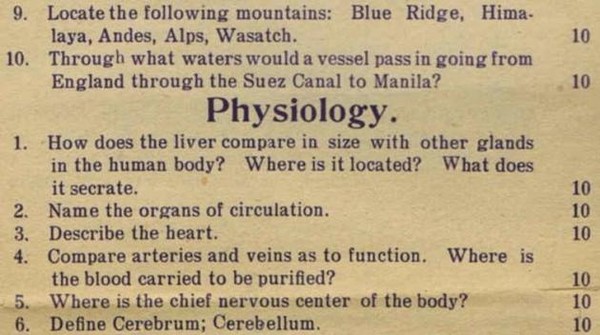 1912 eighth grade exam questions are posing more than just pass or fail results to visitors of Kentucky’s Bullitt County History Museum this week, asking questions that are telling of the past and of the changing course of education, UPI reported this Monday, Aug. 12. While the century-old exam may be a bit outdated, it still has some answers that may surprise many folks far and wide.

This 1912 eighth grade exam is putting both younger students and adults in uncomfortable positions, as many of today’s learners are finding themselves stumped at the 100-year-old test and unable to answer the different types of questions given to children at the time.

The exam itself covers a wide array of topics, including physiology, grammar, reading, spelling, mathematics, government, and history questions. Particularly noticeable is how the century-old questions of the time reflect what was going on around the world and in the U.S. during the 1912 era.

One such geography question asks students where countries are located, all of which were involved and located near World War I.

“Locate the following countries which border each other: Turkey, Greece, Serbia, Montenegro, Romania.”

More than just a pass or fail mark, such a question bears an importance similar to asking students today where Iraq may be on a map. What’s more, several of those students at the time went on to serve in World War I.

Quite a few questions hold great relevance, yet are still hard for both kids and adults today to answer — something that century-old eighth graders would have had to known for this particular exam.

How do you think you would have done on the 1912 eighth grade exam? The century-old test still remains one of Bullitt County History Museum’s most popular attractions.

1912 eighth grade exam: Can you score high on a revealing history test?

A 1912 eighth grade exam is having quite a few students and adults alike this week wonder whether they can score high on a test that many Americans’ ancestors may have had to take when in the single-school classroom. Thanks to a history museum’s donation of a test that’s over 100 years old, Web Pro News shares this Monday, Aug. 12, that some may be surprised at how much this exam truly reveals.

The 1912 eighth grade exam was indeed a real test taken by eighth grade students from Kentucky 101 years ago. It was donated this summer 2013 to the Bullit County History Museum, and from the moment of its arrival, its shared with visitors a unique look at our education system, our past, and how things have changed (and haven’t).

Following the 100 year gap, it seems that many students in schools were learning about some of the same things that students in a modern classroom might, with some big difference. And it’s more than simply asking if you can get a high score on this eighth grade exam.

“For us, this is just fascinating. It puts us in the mindset of 1912,” said David Lee Strange, a museum volunteer. “Some people say that the questions are trivial, but the questions relate to what the children at the time would have been familiar with.”

Several questions reflect the changing times in the world and the threat of world war, a new century, and stark realizations. One question posed:

“Locate the following countries which border each other: Turkey, Greece, Serbia, Montenegro, Romania … 1912 was right around the corner from what would become World War I. Eighteen students in Bullitt County would go on to die in that war,” Strange said.

This 1912 eighth grade exam, despite its age, still seems ultimately to provide Americans with interesting insight into our past and the mindset of what was valued and happening to our nation over 100 years ago. 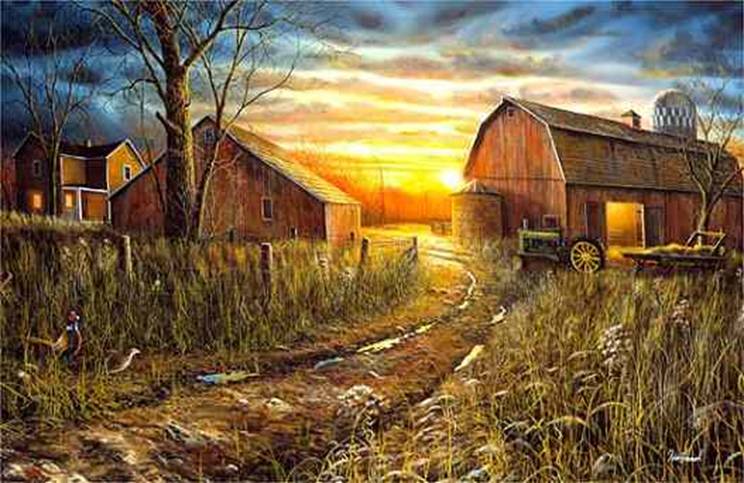 Beautiful Thoughts: I wish the old paths were before us instead of behind us...
archives most recent
More from Beliefnet and our partners
previous posts