Calvin’s Commentary: BIG BROTHER IS NOT ONLY WATCHING AND LISTENING AND READING – NOW HE’S ASKING ABOUT SEXUAL HABITS OF MARRIED COUPLES!  While I normally don’t put a whole lot of stock into Infowars and Alex Jones, Drudge  has also put up the article below, “Australians Forced to Answer Questions About Sex Life – Citizens face jail time for refusing to answer intrusive government survey” – up on his web page DrudgeReport.com  .  Drudge is usually accurate without the wild conspiracy stories touted by Mr. Jones; therefore, I thought it might be a good idea to share this information with you at this Watchwoman blog site. Especially after hearing on the mainstream news media about Verizon, Google, Yahoo, Microsoft, Facebook, Twitter, etc., etc., sharing every thing about us Americans with Obama and his cronies in government. Big Brother is watching YOU! It’s “1984” in 2013!  Worse yet, Big Brother might not be satisfied with just what you speak of, post about and write, but now “he” wants to know what happens in your bedroom and in your sex life! Just because it’s in Australia, don’t think for a second they aren’t considering it here in the USA. The New World Order doesn’t discriminate.  The New World Order wants to know it all and control it all.  I don’t trust one of those evil critters in government anywhere anymore. Do you?  If you do, then you’re more naive than my German Shepherd.  Why should you trust them?  Name me one thing that government has done to gain your trust?  BTW, this latest program called “PRISM” that Edward Snowden has been talking his head off about to the British news people is hiding out some where in Hong Kong, supposedly on his way to Iceland, after the USA issued a warrent for his arrest calling him a traitor — but this spying is nothing new. “Echelon” was a data mining program government that dates back to the Clinton Administration used — at least that is the first I heard about it — scanning every email ever sent for key words such as “bomb” and several hundred other words.  Spying on US citizens has been long-time running and has been on-going for years, and it just getting larger and more intrusive year by year, administration by administration.  Echelon apparently has evoled into PRISM.  I’m confident by now, they have read every thing I’ve ever written — including this post — and heard me over our cell phones telling my husband to add milk to the shopping list he’s taken with him to the grocery store!  “Hello, CIA and FBI.  How ya’ doin’ today?  So how do you feel about violating the 4th Amendment of the U.S. Constitution, something you’re sworn to uphold?”  – Back in the 1980’s my pastor in a Nazarene church frequently used to ask us congregants, “If ‘they’ read every thing you ever wrote and said, would they find enough evidence to convict you of being of Christian?”  Think about that!  ▬ Donna Calvin ▬ Saturday, June 22, 2013

Edward Joseph Snowden (born June 21, 1983)[1] is an American former technical contractor and Central Intelligence Agency (CIA) employee who worked for Booz Allen Hamilton[3], a contractor for the National Security Agency (NSA), before leaking details of classified NSA mass surveillance programs to the press.[4][5] Snowden shared classified material on a variety of top-secret NSA programs, including the interception of U.S. telephone metadata and the PRISM surveillance program, primarily with The Guardian, which published a series of exposés based on Snowden’s disclosures in June 2013. Snowden said the leaks were an effort “to inform the public as to that which is done in their name and that which is done against them.”[5][6][7]
Source: http://en.wikipedia.org/wiki/Edward_Snowden

FROM WIKIPEDIA:  ECHELON is a name used in global media and in popular culture to describe a signals intelligence (SIGINT) collection and analysis network operated on behalf of the five signatory states to the UKUSA Security Agreement[1] (Australia, Canada, New Zealand, the United Kingdom, and the United States, referred to by a number of abbreviations, including AUSCANNZUKUS[1] and Five Eyes).[2][3] It has also been described as the only software system which controls the download and dissemination of the intercept of commercial satellite trunk communications.[4] 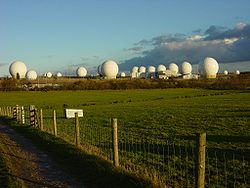 The ability to intercept communications depends on the medium used, be it radio, satellite, microwave, cellular or fiber-optic.[5] During World War II and through the 1950s, high frequency (“short wave”) radio was widely used for military and diplomatic communication,[7] and could be intercepted at great distances.[5] The rise of geostationary communications satellites in the 1960s presented new possibilities for intercepting international communications. The report to the European Parliament of 2001 states: “If UKUSA states operate listening stations in the relevant regions of the earth, in principle they can intercept all telephone, fax and data traffic transmitted via such satellites.”[5]

The role of satellites in point-to-point voice and data communications has largely been supplanted by fiber optics; in 2006, 99% of the world’s long-distance voice and data traffic was carried over optical-fiber.[8] The proportion of international communications accounted for by satellite links is said to have decreased substantially over the past few years[when?] in Central Europe to an amount between 0.4% and 5%.[5] Even in less-developed parts of the world, communications satellites are used largely for point-to-multipoint applications, such as video.[9] Thus, the majority of communications can no longer be intercepted by earth stations; they can only be collected by tapping cables and intercepting line-of-sight microwave signals, which is possible only to a limited extent.[5]

One method of interception is to place equipment at locations where fiber optic communications are switched. For the Internet, much of the switching occurs at relatively few sites. There have been reports of one such intercept site, Room 641A, in the United States. In the past[when?] much Internet traffic was routed through the U.S. and the UK, but this has changed; for example, in 2000, 95% of intra-German Internet communications was routed via the DE-CIX Internet exchange point in Frankfurt.[5] A comprehensive worldwide surveillance network is possible only if clandestine intercept sites are installed in the territory of friendly nations, and/or if local authorities cooperate. The report to the European Parliament points out that interception of private communications by foreign intelligence services is not necessarily limited to the U.S. or British foreign intelligence services.[5]

Most reports on ECHELON focus on satellite interception; testimony before the European Parliament indicated that separate but similar UK-US systems are in place to monitor communication through undersea cables, microwave transmissions and other lines.[10]

A survey conducted by the Australian Bureau of Statistics (ABS) has gone from a voluntary survey regarding economical issues such as employment, to mandatory personal questions regarding one’s sex life.

Australian citizens have been complaining about government surveyors knocking on their doors and asking very intrusive personal questions. One resident in particular was asked what sexual partners his wife had, and also asked when either of them would be home alone. If residents decline these questions, they can face fines or even jail time.

The Australian government has been conducting what they refer to as a “Monthly Population Survey” (MPS) since 1960 in order to provide regular information about the country’s workforce. However, recent complaints have revealed the questions are much more personal than how long you’ve been out of work.

Residents are randomly selected for surveys based on their address. Despite the contradictory information on the ABS website, once residents have been chosen, they’re required to participate in the invasive surveys once a month for eight months. One Aussie in particular was told the only way to get around the survey would be to change addresses.

Yahoo Australia reports in the last year that the ABS took action against 1,500 Aussies, in which 94 were referred to the Director of Public Prosecutions.

The ABS harasses and even threatens over 350,000 homes each year. The only question residents can legally refuse to answer are questions regarding religion.

Note from Alex Jones: The invasive census program being carried out in Australia is part of a global agenda to train people to instantly submit to bureaucratic requests for information and make them think it is the law. From the United States to Europe, from Australia to Mexico, programs like this have been put in place. They are now not just carried out over ten years for business owners and citizens, but every year to get more information. In the United States, it is a clear violation of the Fifth Amendment. This ties into the overall spy and surveillance grid put into place by the NSA. We are being taught that we have absolutely no rights and that all of our information is public as government and corporations are becoming more secret. Below find an article by Mike Adams breaking down this agenda.

Video: Free at Last! Why a Statesman Left one party for freedom! (short video)
archives most recent
More from Beliefnet and our partners
previous posts