The infamous trio suspected of holding three young women hostage for a decade were housed Wednesday in separate cells — where they seemingly brushed off a night of jailhouse insults.

“They seem relaxed,” said a guard at the Central Prison Unit at the Cleveland Police Headquarters. “Mostly they’ve just been sleeping with their heads under the pillows like they don’t want to be bothered.”

A fellow inmate said Ariel Castro, 52, owner of the house where the women were held in chains and ropes, was the target of vitriol from other prisoners.

“They were screaming at him all night,” said the 20-year-old ex-prisoner after his release. “He was just laying there, taking it. They were saying, ‘Don’t feed that rapist! He doesn’t deserve any respect!’”

According to a Cleveland television station, Castro wrote a suicide note several years ago detailing his mistreatment of the three helpless women and explaining what drove him.

Castro portrayed himself as a sex addict, and put some of the blame on the three young victims for getting into his car, said WOIO-TV Action News.

It was unclear why he would write and save a suicide note, or whether the note was recovered from the home by investigators.

Charges were expected later Wednesday against the trio, who should then head to court — their first public appearance since their arrests Monday.

The three have yet to speak with anyone, insisting they don’t speak English, the guard said.

“They’ve been sleeping,” he said. “No one has talked to them because they’re not talking.”

Cleveland Police Chief Michael McGrath, appearing on NBC’s “Today” show, said the three women were bound with ropes and chains found inside the two-story home.  He insisted that police had no record of any calls about strange activity at the house, although neighbors claimed they called police to the home three times.

Twice cops knocked and left when nobody answered the door, the neighbors said — and a third time, the police never showed.

Neighbors recounted seeing naked women wearing dog collars and leashes crawling through the backyard, and a young woman clutching a baby and banging for help on an upstairs window.

The mother of the Castro brothers, Lillian Rodriguez, was hiding Wednesday behind the locked door of her Cleveland home.

But neighbor Lucy Roman, 65, said the woman was a member of the Jehovah’s Witnesses, and was often seen going to church or gardening outside her home.

The Castros are being held here, inside Cleveland Police Headquarters’ Central Prison Unit.

She described eldest brother Pedro as a heavy drinker who lived with his mom and rode a bicycle around the neighborhood.

Lillian Rodriguez “was upset all of the time because of his drinking,” said Roman. “He was an alcoholic. He drank at home.”

But she said he was good-natured and helpful with the neighbors.

“I was very surprised when I heard,” said Roman. “You never really know who your neighbors are.”

The infamous trio suspected of holding three young women hostage for a decade were housed Wednesday in separate cells — where they seemingly brushed off a night of jailhouse insults. 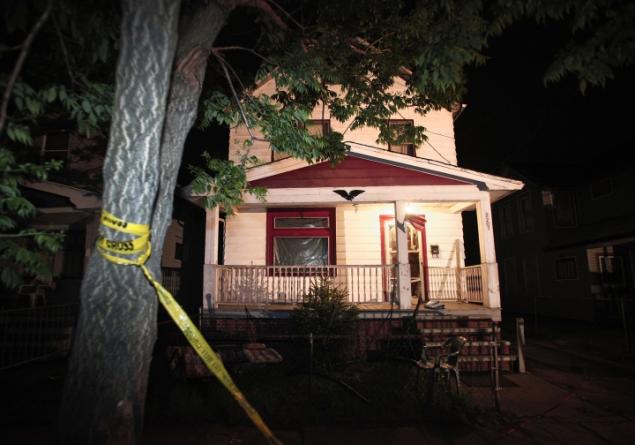