Cleveland kidnapping house of horrors: Neighbors reported seeing naked women crawling on leashes, a woman with a baby pounding on a window for help … but cops walked away 3 times

Neighbors in the West Cleveland neighborhood where three women were rescued after a decade of imprisonment said they had called police 3 times to report strange behavior at the house, but cops never went inside and never followed up.

What the neighbors saw was terrifying and dehumanizing: Naked women on dog leashes, crawling in the dirt. A lady clutching an infant and pounding on a window for help.

Yet the gut-wrenching reports couldn’t persuade the Cleveland cops to go inside the rundown house — where three women kidnapped between 2002 and 2004 were held hostage by the vile homeowner, officials said.

Police banged on the door of the two-story home three times between 2004 and 2011, but never followed up or uncovered the continuing nightmare on Seymour Ave., according to neighbors and authorities.

The hostages were likely on the other side of the screen door on the wooden porch each time the cops arrived, authorities said.

“They didn’t take it seriously,” said Elsie Cintron, who lived three doors down from the ramshackle residence where the three victims finally broke free Monday evening.

The good news of the women’s unlikely flight to freedom was undercut by questions about how authorities failed to find three missing women living under their noses — especially after repeated calls from neighbors.

Cleveland police insisted Tuesday night that “only two calls for service from police are shown at that address.”

One call was made by the homeowner, Ariel Castro, reporting a fight in the street, and the other was related to Castro and his duties as a bus driver, officials said.

But neighbors told a different story.

On one occasion in the spring of 2012, four local senior citizens called police — and waited two hours in vain for authorities to appear at the home of Ariel Castro, 52, a local bus driver.

Neighbor Israel Lugo, 39, recounted how his sister spotted the desperate woman with the baby banging on the upstairs window in November 2011.

He called police after his shaken sibling shared the chilling tale.

“They knocked on the door a good 20 times,” said Lugo, a local contractor. “There was no answer, so they left.”

Cintron said her daughter spied a naked woman crawling through the backyard several years ago, yet cops turned up nothing unusual at the home.

The quartet of elderly women spied three naked women with dog chains and leashes around their necks in the backyard of Castro’s home, Lugo said. Three men were with the women, who called the police.

In January 2004, cops first visited the house when bus driver Castro was accused of leaving a child aboard his vehicle.

But nobody answered the door at that time, and no charges were ever filed.

Jannette Gomez, who lives on the block, said she was second-guessing everything since the hostage trio emerged from the home.

“I can’t lie: I feel a little guilt,” he said. “I should have spotted it. I’m all torn up. He had the perfect mask to hide that monster.”

According to neighbors, Berry’s daughter was wearing a black wig, ballet dress and boots when she and her mother kicked their way through the front door of Castro’s home.

Officials refused to identify the little girl’s father, although three brothers were arrested in the bizarre case: Ariel Castro and siblings Pedro, 54, and Onil, 50.

Paternity tests were expected to determine which of the men was the dad. Ariel was seen playing with the little girl at a park near his home Sunday, Lugo said.

“‘It’s my girlfriend’s daughter,’ he said,” Lugo recalled. “She looked happy. They were playing like a regular Sunday. I didn’t think nothing of it.”

Authorities were investigating whether the three women were kept in the home as sex slaves by their captors. All three were likely tied up for years during their captivity, officials said.
Law enforcement officers stand watch in front of a house on Seymour Ave. in Cleveland.

Forced sex resulted in up to five pregnancies among the victims, WKYC-TV of Cleveland reported, citing “several police sources.” That report could not be confirmed by officials Tuesday night.

Cleveland Safety Director Martin Flask said Tuesday morning there were no reports about criminal activity at the home. But officials were still combing through police, fire and EMT databases.

More creepy details emerged Tuesday about Ariel Castro after his arrest in the shocking case. The prime suspect in the three abductions reportedly attended a pair of vigils for the victims while holding them hostage.

His brother Pedro, as he watched authorities dig up a vacant lot last year in a hunt for Berry’s body, dismissed the search as pointless.

“That’s a waste of money,” he told a local television station.

There were also connections between Ariel Castro and the DeJesus family.

Castro knew the girl’s father, and other relatives once lived on the same block where the girl was held captive, said neighbor Javier Marti.

“That makes it even more wrong, more shocking,” said Marti, 51. “I never in a million years would think he would do something like that. It’s hard to believe.”

The three brothers remained behind bars Tuesday, although officials had yet to announce any charges.

Normal protocol calls for Cleveland suspects to be charged within 36 hours, but a judge has extended that period to 48 for the case, police said Tuesday night.

FBI investigators descended on the two-story house near downtown Cleveland, scouring the property and its interior for evidence.

During a morning news conference, emotional law enforcement members offered their thanks for a happy ending to the sad case.

“Prayers have been answered,” said Steve Anthony, head of the Cleveland FBI office. “The nightmare is over. These three young ladies have provided us with the ultimate definition of perseverance.”

Cleveland Police Chief Michael McGrath said he believed all three women were held captive in the Cleveland home since they were kidnapped.

The terrified woman was wearing pajamas and a pair of sandals when she made her escape, according to one neighbor.

Aurora Marti, 75, was sitting on her porch when a shaking and weeping Berry bolted from the home — and screamed her name at the top of her lungs.

“Amanda was hysterical, screaming,” said Marti. “She was weak and skinny, and she had a little girl with her. She was crying and scared. I felt so sorry for that baby.”

The vision stuck with another neighbor, Ana Tejada, who was unable to sleep or eat the next day.

Police arrived at the scene Monday evening and led the other two women outside. Both had blankets wrapped around their heads before cops whisked them away.

“What these young girls went through, if you had seen them last night, you’d have nothing but compassion and love in your heart for them,” said Cleveland Deputy Police Chief Ed Tomba.

“We join the community in celebrating the safe return of these three women,” said hospital spokeswoman Tina Shaerban Arundel.

The Castro family was sent reeling by the arrests, and the three women reunited with their families while remaining far from the media glare.

At the home of the DeJesus family, a sign festooned with dozens of balloons declared, “Welcome home Gina.” Her aunt, Sandra Ruiz, said the scene inside the home was intense when the youth walked inside.

The failure to find the three missing women was reminiscent of the 2009 case in which cops were criticized after 11 women’s bodies were found in the Cleveland yard of killer Anthony Sowell.

Tina Miller, a cousin of Berry, was among those who turned out just last month to mark the 10th anniversary of her abduction.

The case never dropped off the radar of law enforcement, either. Investigators twice launched digs in the hunt for Berry’s body after receiving tips in the case.

Jessica Aponce, 24, was walking home with DeJesus before her teenage pal disappeared.

“She called her mom, and told her mom she was on the way home, and that’s the last time I seen her,” said Aponce. “I just can’t wait to see her. I’m so happy she’s alive.”

Neighbors described Ariel Castro as a loner who never allowed anyone inside his two-story home, and kept all the doors locked and shades down.

His daughter Angie declined to discuss her father’s arrest, but one of her Cleveland neighbors said the Castro clan was a scary bunch.

“He looks like an angel, but he’s not,” said Adriana Castro, 57. “I will never forget his face. All of the family is screwed up.”

Ariel Castro’s neighbors had little nice to say about the suspect who lived so comfortably with his secret.

“There ain’t a place warm enough for that maggot,” said next-door neighbor Greg Schultz. “He’s a pretty sneaky son of a bitch. I’ve been there a year, they’ve been there 10 years, and I never saw a thing.” 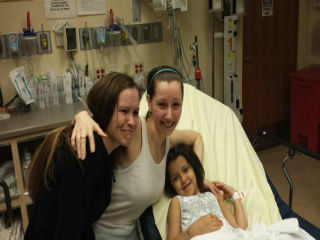 UPDATE: The name of Amanda Berry's daughter born in captivity
archives most recent
More from Beliefnet and our partners
previous posts