Jihadism (also jihadist movement or jihadi movement) is a controversial[1] term to describe the renewed focus on armed jihad in Islamic fundamentalism.

Jihadism emerged in the 1960s, with roots in the late 19th and early 20th century ideological developments of Islamic revivalism, developed into Qutbism and related ideologies during the mid 20th century. The rise of jihadism was re-enforced by the Soviet invasion of Afghanistan in 1979, and has been propagated in various armed conflicts throughout the 1990s and 2000s. A specifically Salafist jihadism has been diagnosed within the modern Salafi movement by Gilles Kepel in the mid-1990s.

“Jihadism” in this sense covers both Mujahideen guerilla warfare and Islamic terrorism with an international scope as it arose from the 1980s, since the 1990s substantially represented by the al-Qaeda network. Jihadism with an international, Pan-Islamist scope in this sense is also known as Global Jihadism. Generally the term jihadism denotes Sunni Islamist armed struggle. Shiite and Sunni mutual sectarian tensions led to numerous forms of Sunni (Salafist and other Islamist) jihadism against Shia Muslims and Shia mosques.
( Wikipedia – http://en.wikipedia.org/wiki/Jihadism )

Editor’s Note:  The only reason Jihadism is labeled “controversial” is because the Council onAmerican-Islamic Relations (CAIR), most every Muslim mosque and every Muslim extremist wants YOU to be deceived.  Note too, that Jihadism and Jihadist and every form of that word are banned by the AP news wire and other mainstream media outlets have fallen in line with that censorship. Included in the “AP no print list” is terrorism and Islamic. Truth be damned!  — Donna Calvin

Calvin’s Commentary: To not understand history is to repeat it. To not identify an enemy and ignore him and his potential is to encourage him to act. Many Americans are not aware of the Beslan Massacre that happened at the hands of the Muslim Islamic terrorists who are the same people where Dzhokhar and Tamerlan Tsarnaev are from. Chechnya Jihadists have been referred to as the most heinous, the most cruel, and the most dangerous of all Islamic terrorists. But the mainstream media {controlled by Council on American-Islamic Relations (CAIR)} refuses to acknowledge just how dangerous this brand of terrorists are. The mainstream media (controlled by CAIR) has forbidden the usage of the words Jihadists, terrorist, and Islamic when referring to those who are like Dzhokhar and Tamerlan Tsarnaev. Below is a video of pictures and some stills of the Beslan Massacre. You need to know. Trust me, while these are graphic, I did NOT put in any of the worst pictures of mutilated bodies and burned black corpses of the children who were torched alive. One child, a survivor of Beslan (not shown in any video here) described how a human body curls up when it’s burned alive. The worst part for me, in watching videos of this terrorist act was when after a day or two, mothers of nursing babies were allowed to leave. Why then you ask? Because almost everyone of those nursing mothers had an older child she had to leave behind. When I heard the cries of the children whose mothers were leaving their older children behind, well… there just aren’t words to describe the feeling in my heart. ▬ Donna Calvin ▬ Tuesday, April 30, 2013 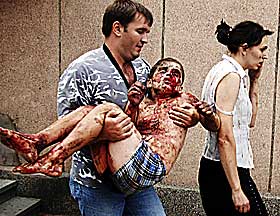 Do You Know About The Chechen-Led Massacre at Beslan?

Chechnya, a Russian republic that has not been on the public radar since its wars with Russia in the 1990s, has long been a hot-bed of Islamic extremism. An earlier report in TheBlaze even highlighted the growing presence of Saudi Wahhabism — the most puritanical and stringent form of Islam — in the North Caucasus as the region serves as a base of operation for al-Qaeda operatives among other jihadis.

To illustrate just how volatile the region is, it perhaps is prudent to look at the infamous Beslan massacre, in which 186 children and 148 adults were savagely massacred by jihadists demanding Chechen independence.

On September 1, 2004 the Chechen-Islamic militant group, Riyadus-Salikhin Battalion, set siege to “School Number One” (SNO), a grade school Beslan, North Ossetia, another Russian republic situated in the North Caucasus. Over 1,100 people including 777 children were taken hostage, 384 of whom were killed. In the aftermath approximately 180 were reported missing.

Chechen terrorist Shamil Basayev led the massacre, all the while demanding the carnage was to facilitate Chechen independence from Russia.

On the third day of the crisis, Russian security forces, using tanks and rockets, reclaimed the school, but the damage was done. Reports indicate that survivors remain traumatized to date.

Below, Glenn Beck and a panel of experts review the graphic events of those three fateful days in 2004, as well as discussed Chechen-Islamic terrorism in greater detail. Caution, the videos below contain graphic details about the massacre:

I cannot get Beck’s videos to embed here – To view both of these excellent videos, please go to:
http://www.theblaze.com/stories/2013/04/25/do-you-know-about-the-chechen-led-massacre-at-beslan/

Video #1: The Story of Beslan: What are the ties between Al-Qaeda terrorism and Chechnya? Glenn explains . . .
Video #2: Beslan, Terror, and Chechnya: An expert panel analyzes the history between Chechnya and terrorism

BELOW IS ANOTHER VIDEO YOU WILL WANT TO VIEW TO GET A BETTER PICTURE OF WHAT MUSLIM JIHAD MEANS AND WHAT ISLAMIC EXTREMISTS HAVE PLANNED FOR AMERICA. 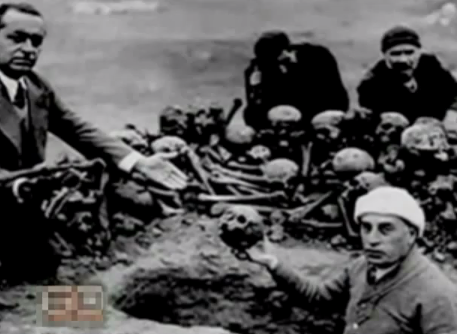 The 1915 Armenian Genocide – Why Is It Still Denied By Turkey (And The U.S.)?
archives most recent
More from Beliefnet and our partners
previous posts