What do you call the 1915 “mass deportation” of Armenians from the Ottoman Empire (Turkey) that resulted in the death of 1.5 million people?

Most historians and Armenians around the world call it genocide. The Turkish government and the United States are not among those who will officially accept the word “genocide” when speaking of the decimation of the Armenian people in the early part of the 20th Century. (And that list also includes U.S. Presidents.)

The lack of respect given to the Armenian genocide is shocking when you consider the scope and brutality of the event that killed 75 percent of the Armenians — a predominantly Christian group.

Armenia was a trendsetter when it came to Christianity. The country adopted that faith in 301 A.D. This was even before the formation of the Holy Roman Empire. For centuries the Armenian people built a healthy and prosperous country. However, in the 15th century, the Ottoman Empire absorbed Armenia and the Armenians. The non-Muslim Armenians were classified as “infidels” and had to pay higher taxes and saddled with fewer rights than Muslims.

The Ottoman Empire stayed dominant in the region through the 19th century and into the early part of the 20th century. But in the late 1890s, Armenians were growing tired of their status as second class citizens and continued their push for more rights. In 1894, that push was met with a violent response from the Sultan who turned loose his private army on the Armenians. In the ensuing battles between 1894-96, it was reported that as many as 200,000 Armenians were killed by Sultan Abdul Hamid’s troops in what has been called the Hamidian Massacre. However, the killing of the 200,000 Armenian Christians was nothing compared to the 1915 genocide.

What led to the near extermination of the Armenians? It appears a combination of a few factors were working together to create a rabid form of Turkish nationalism that saw the Armenians as the enemies of the state. After all, the non-Muslims were officially considered “infidels” in the eyes of the Turks.

In 1908, a group of young Turks forced the Sultan out and took control of the government. At first they talked of bringing new freedoms to the Armenian people. Unfortunately, those freedoms never were granted by the ruling “Young Turks.” Instead the Armenians were seen as a threat to the shrinking Ottoman Empire.

1912-13 had the Turks losing huge chunks of their land to Christian regions that were breaking away. Greece, Bulgaria, and Serbia were all successful in their efforts to leave the Ottoman Empire. This was a devastating loss of power to the Turks and was the spark for even greater nationalism to foment.

Muslim refugees from the now-Christian breakaway countries poured into Istanbul with tales of Christian violence against their families. Some of the more extreme members of the Young Turks formed the Committee of Union & Progress (CUP). The CUP was focused on pushing Turkish nationalism, their chant was “Turkey for the Turks.”

The growing Turkish nationalism was also fuel for more hatred against the Armenian community, especially after Germany and Russia began warring in 1914. Turkey sided with Germany in this conflict. The Turks hoped a defeat of the Russians would help in the prospect of rebuilding their empire. In December of 1914, the Ottoman Turks tried to invade Russia, but suffered a horrible defeat. More than 100,000 Russian troops stormed across the border into Turkey and reports say that more than 5,000 Armenians helped the Russians, some even enlisting in the Russian Army.

This was likely a move that enraged the Turkish leaders who saw the Armenians as a liability. The Armenian members of the military were immediately disarmed and moved into labor camps and subsequently executed. 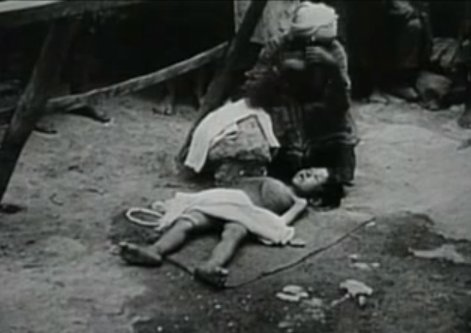 Not long after that, on April 24th, a group of 250 Armenian intellectual leaders of the community were rounded up and shipped off to a camp where they were killed.

Turkey had killed off the Armenian soldiers and the cultural elites. All that remained was to order the rest of the population to comply with a relocation order that was essentially a death sentence. Most of the Armenians were forced to march for sixty days and many did not survive the trip.

Like the Nazis, many Armenians were also transported via rail. And, also like the Nazis, the Turks forced their victims to purchase tickets for the ride to their own extermination.

The accounts of the atrocities committed against the Armenians is as brutal and disgusting as any you have heard about from Hitler’s attempts to exterminate the Jews from Germany and the world. Small children and old people were marched over mountains and in circles, without food and water, literally until they died. Young Christian girls were defiled by the Turkish soldiers. There are reports that many killed themselves after being raped. The barbaric treatment of the Armenian women went even further.

In his post on the genocide, (The Forgotten Genocide: Why It Matters Today) Raymond Ibrahim recounted the story of a woman who claimed to have witnessed the brutal crucifixion of 16 young girls.

In her memoir, Ravished Armenia, Aurora Mardiganian described being raped and thrown into a harem (which agrees with Islam’s rules of war).  Unlike thousands of other Armenian girls who were discarded after being defiled, she managed to escape. In the city of Malatia, she saw 16 Christian girls crucified: “Each girl had been nailed alive upon her cross, spikes through her feet and hands, only their hair blown by the wind, covered their bodies.”  Such scenes were portrayed in the 1919 documentary film Auction of Souls, some of which is based on Mardiganian’s memoirs.

Why Won’t America Call It Genocide?

It’s a good bet that Turkey and its leaders do not want to use the term genocide because it would likely cost them considerable sums of money in reparations, as well as the public embarrassment they would have to endure. But what about America?

No American president has officially called the mass killings that started in 1915 “genocide.” President Bush went as far as publicly urging Congress to reject a resolution on the subject.

In 2008, presidential candidate Barack Obama promised that, as president, he would acknowledge it, saying; “Armenian genocide is a widely documented fact.”

Instead of using the word “genocide” the White House statements all use the term “Meds Yeghern.” What does that mean?  Meds Yeghern is an Armenian phrase that has the same meaning as genocide in their language. But Armenians want the world to recognize the atrocity they suffered at the hands of the Turks.

And while our presidents won’t say the word or put it in statements, the Turks are actually forbidden from using it. The word “genocide” is off limits — as in illegal. You can be locked up for saying the word or using it in a story. (TheBlaze staff would likely be placed under arrest and receive death threats for this article alone.)

So, why won’t a U.S. President call the very well-documented forced removal of 1.5 million people from their homes — many who were forced to march more than 50 miles into the desert where almost certain death awaited them — genocide?

CBS’s “60 Minutes” filed a story that speculated our lack of ability to call this genocide and what it really is: That it might have something to do with America’s military relationship with Turkey and that the country is vital to delivering supplies to our troops on the ground in both Iraq and Afghanistan.

The “60 Minutes” segment also includes a chilling video shot on the banks of the Euphrates River where it is believed 450,000 of the victims perished. In fact, the remains of the Armenians are so prevalent in the area that all you need to do is scratch the sand along the river banks and you will find pieces of human bones that have been there for 98 years.

The Armenian people are persistent. Ninety-eight years after the genocide began in their country, they still hold out hope that Turkey will recognize what was done to the Armenians. They also hope that America will make good on the promises made by so many presidents.

In the meantime, Armenians are contributing in communities all over the U.S. As a matter of fact, one of the largest Armenian communities in the country is in Watertown, Massachusetts — a town that found itself in the center of the media spotlight this week. Watertown is also the home of the Armenian Library and Musuem of America.

You can watch the entire 60 Minutes piece here.

(H/T and additional support provided by: Raymond Ibrahim and 1915 AGHET – The Armenian Genocide)

read next post
Why is the Obama Administration Failing to Stop Jihadists from Attacking and Killing Americans?
archives most recent
More from Beliefnet and our partners
previous posts