I made an illegal U-turn. Shortly thereafter a cop pulled up behind me and turned on his flashing lights.

“I saw what I did as I was doing it,” I told him, owning up to my error before he accused me.

The policeman was inquisitive. Along with the usual, “Do you still live at so and so address,” he wanted to know where I worked. I told him I was a self-employed writer. “Good for you,” he intoned and then wanted to know what I wrote about. “I help people see their gifts and use them,” I replied as briefly as I could, hoping for an end to the questions.

He said he liked my topic and the fact I was doing something positive with my life. When it came to people, however, he admitted he was “a cynic. All day long I deal with either trouble-makers or mindless sheep!” he exclaimed.

I didn’t know what to say. Dark thoughts flooded my mind. Does this cop know something I don’t—that we’ve gone bad? Our towns and states and nation are going down the tubes? People have given up their dreams? Is it true what the media seems to peddle—the whole world is going to hell in a handbasket? Have we given up?

Then another thought. Stronger: No, we haven’t given up. Not at all. It’s against our nature, our very human-ness to give up. Never!

We are forming a new vision of the future. We are dreaming a dream bigger than freedom and well being for the land between the Atlantic and the Pacific coasts.

Now our dream encompasses the whole planet. All people having the opportunity to thrive. All races and religions living in respect for one another.

I—finally—drove away with a traffic summons and a renewed message. I need to remind people that our dreams haven’t been destroyed—they are re-forming, expanding. What seems like chaos and failure right now is really the in-between time of a new, bigger vision being born.

I edged carefully into the flow of traffic and recalled the words of a dreamer:

What this country needs more than anything else, more than ANYTHING else, is a rebirth of vision and a rebirth of dreams. We’ve got to believe in the future because we’re old as a nation, as a people. We are old as individuals when our memories are more important to us than our dreams.

…I’m here to give you the good news: What you have been is not as important as what you choose to become. …For we are more molded by the future than the past. That’s what makes us superior to animals. Animals are Pavlovian. They’re molded by the past. But humans are able to imagine and dream about the future.

Thank you for visiting my blog. I appreciate your comments and feedback (Email: Gloria@gloriarose.com). Let’s connect: 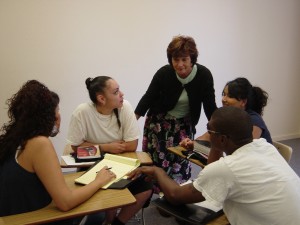 Feeling Dismissed or Disrespected? Here's What to Do.
archives most recent
More from Beliefnet and our partners
previous posts

I read a book about the impact of childhood memories. The author, a well-known psychologist, wrote that if we recall our three most vivid memories, we’d see who we are. Or, he could describe to us what we’re like…something like that. I’ve given it a lot of thought. For me, traveling back in time always […]

Chaos Gave Me 4 Truths and a Path

My elderly father succumbed to a stroke. Then bed bugs arrived in the house I just completed decorating. The creepy, blood-sucking insects infested again and again. Thirdly, a new friend turned postal…frightening me with her behavior.My world teetered dangerously out of control. In the midst of chaos on multiple fronts, I faced realities I’d successfully […]

One Thing to do with your life

Think about it:  You didn’t ask to be born. You don’t know exactly where you came from or where you’re going—if anywhere—after you die.  Yet, you’re here. Living in this place and time.  For a reason?  You wonder, Who am I? and Why am I here?  It’s disturbing. We didn’t choose to be alive on […]

An Ex-boyfriend, Two Professors and ~ How To Coach Another Person

It was the worst time to fall apart. The final semester of my senior year in college was for completing projects and planning my future. Instead, I was depressed. Hardly able to get out of bed. Skipping classes. Doing the bare minimum, if that. The reason was my boyfriend—EX-boyfriend. Our break-up seemed right at the […]