Astrology And The Fall And Rise Of Tonya Harding (Part Two)

In Part One (click HERE for it), I discussed the birth chart of figure skater and 90s Celebrity Punchline Tonya Harding. Here, in Part Two, I’ll be going over the astrology of both the attack on her rival Nancy Kerrigan and, fourteen years later, how the release of I, Tonya is helping to turn her public image at least partly around.

I won’t go into too much detail about the circumstances around the physical assault on Tonya’s rival Nancy Kerrigan (because it’s complex, and besides, you really should see I, Tonya) but here’s the summary: Tonya’s husband at the time (Jeff Gillooly) arranged via an intermediary to intimidate Kerrigan, so that Tonya might score higher at the upcoming Winter Olympics. Whether through miscommunication, outright stupidity, or a combination of the two, that intimidation took the form of a police-style baton to Kerrigan’s knee. 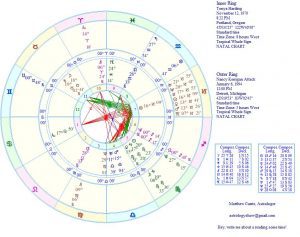 When the attack happened (I’m using 12 PM as the time of the attack, and if anyone has something more accurate please let me know), there were no less than six planets transiting through Tonya’s Seventh House if you use Whole Sign Houses (or if you prefer, six planets within conjunction range of Tonya’s Descendant). The Descendant is the part of the birth chart most concerned with marriage and partnerships, so should we be surprised that Mars (violence) is included in this mix?

Thus, Tonya Harding became a punchline for years afterwards — even though she herself was not directly involved in the attack, and there is considerable question about whether she knew it was going to happen at all. Her Ninth House is ruled by Neptune, and that can sometimes indicate illusory or incorrect legal outcomes. That certainly seems to be the case when one considers that, of all the people convicted of the attack on Nancy Kerrigan, Tonya is the one who in most regards suffered the worst. 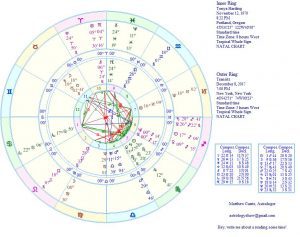 When I’m doing a reading for a client who is going through difficult transits, I will often tell them that if you stick around long enough eventually something good will happen. For Tonya Harding, that moment of redemption took nearly 14 years, and yet that moment has finally come around for her. As was the case in January 1994, the transits to Tonya’s chart are very telling.

Part of a person’s public image is their Midheaven, so we shouldn’t be too surprised that Tonya’s Midheaven (on the release date of the movie) was receiving aspects from Mercury, Saturn, and Pluto. Now: it should be noted that transiting Saturn was square Tonya’s Midheaven on the release date. Normally you’d expect a square from Saturn to be “bad.” Certainly, I Tonya doesn’t let its subject entirely off the hook. But maybe more so than either “good” or “bad,” a square from Saturn represents a breaking of the existing order, and frankly that’s what the public’s perception of Tonya Harding needed. It should also be noted that transiting Chiron was conjunct her Midheaven, which is perfect symbolism for facing the unhealed wounds her public perception has suffered. Mostly though, with transiting Pluto conjunct her natal Descendant, Tonya’s closest relationships (her ex-husband, her mother) have been exposed and (probably) transformed.

It should also be noted that in both cases, Tonya was near her Jupiter Return, and in her birth chart Jupiter is in the Fifth House (creative endeavors).

F. Scott Fitzgerald said “There are no second acts in American lives,” but famous quotes aren’t hard and fast rules. Tonya Harding seems to have been given a second act, and I’m hoping she makes good use of it.