Astrology And The Fall And Rise Of Tonya Harding (Part One) 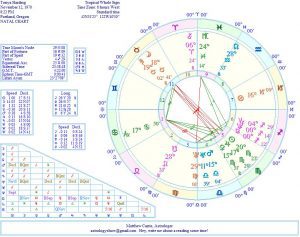 In January 1994, a series of events took place that turned one of the world’s best and most talented figure skaters into a villain and a punchline in the eyes of the world. In December 2017 the film was released that appears to have led to some form of redemption for her. In both cases, the astrology involved is remarkable.

Figure skater Tonya Harding was born November 12th 1970 in Portland Oregon. Before I go any further, I should note that we aren’t quite certain of the time of birth. We know it was at roughly 8 to 10 in the morning. The time of birth I’m using here is the generally accepted one (8:22 PM), but we should be mindful of this. Regardless, it appears Tonya has Cancer rising, and because of the uncertainty over the exact time, this is one of those occasions when using Whole Sign Houses is particularly useful.

Here, in Part One, I will be having a look at Tonya’s birth chart and how it perfectly reflects her history of relationships, both with her mom, her husband, and others in her social circle. In Part Two I will be having a look at her transits, both at the time the attack on her Olympic rival Nancy Kerrigan happened, and what’s happening with Tonya’s transit now, after the release of the critically acclaimed biopic I, Tonya. Both are remarkably instructive.

First: one should always be careful when applying classic, hard and fast astrological interpretations you find in a textbook to real people and their real lives. For example, no… Mars in the 8th house does not at all guarantee that you will die a violent death. Having said that though, there are a lot of classics in Tonya Harding’s birth chart that stand out.

Looking at Tonya’s birth chart, it is immediately obvious what is driving much of her life. On the one hand we have a Sun Venus Jupiter conjunction in Scorpio in the 5th House. This demonstrates both the talent required to be successful at create expression (Venus), combined with the intensity of Scorpio to achieve results in a very physically demanding artistic pursuit.

That’s all fine and well, but this is not proving to be a comfortable combination for Tonya throughout the course of her life. Her three planet stellium in Scorpio is opposed by a close Moon-Saturn conjunction in Taurus. If the 8:22 PM time of birth is correct, all five of these planets are in close aspect to the Ascendant. If your calling in life requires that people pay attention to you and find you fascinating to watch, having five planets in close aspects to the Ascendant is a good place to start.

Sun opposite Moon, with the Moon conjunct Saturn, is traditionally associated with parental difficulties, and Tonya has had plenty of those. Her father left at a young age and her mother, by all accounts, was and is pretty abusive. Saturn as the ruler of her 7th house, with Saturn in that opposition to Jupiter, indicates difficulties in marriage and with her closest rivals, and Tonya has certainly experienced that: her husband was one of the people convicted in the attack on Tonya’s Olympic rival Nancy Kerrigan. Traditionally, the seventh House is often called “the House of open enemies.”

The birth chart lays out all the basic themes of one’s life here on Earth, but it’s the transits that time those events. Next time, I’m going to have a look at how Tonya’s remarkable birth chart and the transits to it set her up to become one of pop culture is greatest villains of the 1990s, and how her transits now are rehabilitating her public image in a big way.

Reshape Your Universe With Astrology In 2018, Part Two: Means
archives most recent
More from Beliefnet and our partners
previous posts