By projecting the right energy, you can make a great impression. Here’s how even the shyest guy can come across as a positive, exciting party animal and get more dates. 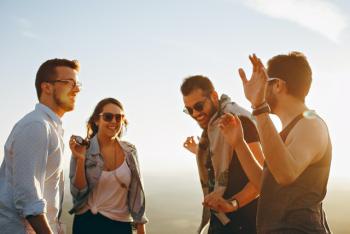 Some men seem to do this naturally – they’re always smiling, they control the conversation, they spur people into action. These men bring an infectious energy to a group. When they meet women, their positive energy is engaging and exciting. It’s not surprising that they get more dates – their energy actually acts as a magnet: women come to them. If you’re more of a wallflower than a dynamo, don’t worry: just like the techniques of using compliments and adding value to a conversation, projecting positive energy is an easily learnable skill. How’s how to do it:

Many men are scared of talking to women – or just talking with a group of strangers. But if you don’t want to be in the conversation, the other people in the group will pick up on it. If it’s just you and a woman, she’ll pick up on it even faster. At best, she’ll think you’re shy. At worst, she’ll think she’s the problem and become uncomfortable herself. It’s not uncommon for a shy man to feel so uneasy at being in a one-on-one conversation (especially with an attractive woman) that he actually gives the opposite impression – the woman thinks he’s trying to make a quick exit. It’s essential to go into every conversation with positive expectations. If you believe that it’s going to be fun, it will be.

Control the Topic and Pace

Conversations between strangers can quickly drift off into dead-ends. You need to play two roles – participant and facilitator – in order to project positive energy. Talk, but check that no one person is dominating too much and look to see who isn’t getting a turn. If someone’s eyes are glazing over because the current subject bores them, see what you can do to bring them back into the conversation – if you can’t easily change the subject then at least engage them. If the woman you’re interested in is the one who’s being excluded and you can bring her back in, you’ve just created one of the best openings. You’ll be her hero, if only for a few seconds.

Build Up, Don’t Shut Down

Sometimes a great topic or idea will surface for a second, only to be lost as someone misunderstands, the person suggesting it stumbles (or gets nervous) or someone (maybe even you) inadvertently shuts it down. Letting this happen isn’t the way to project positive energy or get dates. This is how a conversation dies:

You: (Wanting to agree with her) Um… Yeah, they do suck

This is how a conversation builds:

You: Really? What were they called?

Never shut down – let the conversation flow. This doesn’t mean you can’t also control the topic – in the example above, you could have asked Kirsten where the place was, if she went out much or if she was a local.

Surprise and spontaneity are always great ways to generate energy. Everyone likes to have an adventure – it gives them a great story to tell the next day. It also gives the night an ‘anything can happen’ feel. Go on a mission to make the DJ change the music. Agree to pretend it’s your birthday or that you just got engaged so you get free drinks. Let’s take one more look at that conversation with Kirsten:

You: Let’s go there.