Types Of Idiots You Meet in Bars 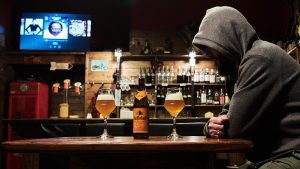 They say that for every person there is the perfect partner. One person who will mesh with you and complete you. It’s total crap, of course, there are usually dozens of them. The problem is weeding out the idiots, jerks and douchenozzles so you can see them.

As always, we aim to assist.

Since so many hook ups happen in bars, parties and clubs, lets explore the types of idiot you will find there.

Watch out for this guy. He seems harmless enough, maybe two drinks over his limit and sitting there quietly, but he is waiting to spill all his bad karma on anyone foolish enough to listen, or even smile in his direction. And oh boy, does he have problems to share.

He is out to find a surrogate Mommy, with maybe some pity sex thrown in. Annoyingly, he is usually successful at both.

But do you really want a manchild that obviously makes consistently bad decisions in your life, or even wasting your partying time? Make your excuses and move away from him.

He sees himself as James Bond. Impeccably groomed and dressed, with all the right lines at the right time, witty, just the right amount of personal space invasion and the ability to make you feel like you are the only one he has been waiting for. Yeah – I am jealous, and many readers are now screaming at the screen for directions on how to find him right now.

Think a moment. Getting to that stage takes a lot of practice. If he put a notch on his bed for every successful conquest, the bed would have collapsed years ago. And that is all you are to him: just another conquest.

Unlike the others, this guy is positively dangerous and to be avoided at all costs. He looks normal enough, but listen carefully as he talks, both to you and others. He is the master of the put down, the disdainful or hurtful comment.

“Words can’t hurt,” some of you say. Yes they can. They do. They also reveal something terrifyingly absent in this guy’s soul. Any person who can only feel good about themselves by making others feel bad is a psycho. Hooking up with a psycho is never a good idea.

You’ll see him, surrounded by his friends (see next section), flexing a bit to show off his muscles while loudly discussing his sporting prowess. Watch for tight T-shirts and jeans as a fairly obvious giveaway, should he happen to be silent for once.

This guy is a judgement call. There is nothing wrong with staying trim, working out and playing sports. It depends on the degree of narcissism he shows. The more self obsessed a guy is, the harder you will have to fight for a share of his attention.

Jock, Phil and Mick can’t work in a vaccuum. They need their cheerleaders like other guys need air.
The presence of the pack, a group of (mostly) guys who stay together, laughing and joking but not really getting involved with others until one of the above guys makes their move is a dead giveaway. They are usually both harmless and fun individually, mostly decent guys and worth getting to know.

Marty latches on to you and will ignore all hints to leave you alone. In extreme cases, even faking your own death doesn’t work. The guy will even be waiting for you outside the toilet, drink in hand, for you.
Do I even have to explain this one? The only way to get rid of Marty is to hook up with someone else right in front of him. Sometimes being cruel is the only way to preserve your sanity.

Not Peter, but rather named after the Invisible Man, you simply will not see this guy, even if he is standing right in front of you. His unique ability to blend in to his surroundings, so useful in ninjas, is a liability for him.

Why include him here? To protect him. If you are happy going after a guy who is self effacing to the point of invisibility, there is something wrong with you.