Five Things Your Guy Should Never Do On Facebook 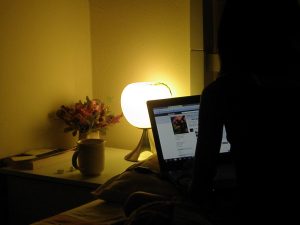 While it started out as a place to reconnect with grade school classmates and play Farmville, Facebook has (whether we like it or not) increasingly become a major part of our daily lives. Seeing as how employers and lawyers use Facebook as a way to dig up info on people, it’s safe to say it’s gone beyond a fun diversion. What you’re putting on Facebook can affect your reputation. Similarly, what your guy does on Facebook is seen by your friends, family members, coworkers, and more. Therefore, it’s important that he conducts himself in a respectful manner.

Here are five things your guy should never do on Facebook.

There seems to be some debate about this one, which is baffling. If you don’t care about his relationship status, or, for that matter, list yourself as single or leave the field blank, then it’s not a big deal. But if it bothers you that his page doesn’t list him as “in a relationship,” then he should man up and change it. All it takes is one click. Why make it an issue? Everyone knows you’re a couple in the real world, right? So why act like you’re single online? A guy who refuses is either keeping his options open or has one foot out the door.

There are few absolutes in this world. But one thing I know for sure is that guys in relationships who post “HOT!” and “DAMN GURL!” on another woman’s Facebook photos are creeps. (The same think applies to “likes.” A guy “liking” a photo of his female friend in a bikini is both gross and lazy. If he’s going to be a creep, he should at least put in the effort to type something.)

Why do guys think this virtual cat-calling is okay? If you were out with your guy, and he yelled “Wow!” at some random woman on the street, you’d punch him in the Anthony Weiner and change your Facebook status to single right then and there. Most guys would never do that. But many people think they can get away with stuff online that they’d never do in real life. And it’s even worse if he’s writing writing leering comments on his friends’ pages. A good rule of thumb is to make sure he acts on Facebook how you want him to act in real life. For instance, writing “Nice dress! Congrats!” on his friend’s wedding photo is fine. Writing “You look hot!”…not so much. Imagine if you were at the wedding and your guy said that to the bride in person. Everyone would feel awkward. The same thing applies online.

Complain about you in his status updates

The absolute worst thing you can do after a fight is to air your dirty laundry on the Web. Even if it’s a thinly veiled, passive aggressive comment (“Don’t you hate it when women do…”), everyone on his friends list will assume he’s talking about you. And that is so not okay. Facebook should not be that poor friend who is stuck in the middle of your argument who he turns to go, “Don’t you agree with me, Steve??”

If a guy has “Dave likes Jenna Jameson” on his page, he might as well add a status message that reads, “Dave is masturbating right now.” Do you want your friends or (god forbid) your mom to look at your guy’s page and see the entire stable of Vivid Video performers in this “interests” section? This rule also applies to bikini models, webcam models, “Suicide Girls,” and pretty much any model who poses either nude or scantily clad on the Web. Celebrities I’ll give a pass on, as long as it’s not Sasha Grey. Being on Entourage does not make her an actor.

To be clear, this is not to say he can’t be friends with an ex on Facebook. And it’s not to say he can’t “like” her updates, comment on her photos, or do any of the many time-sucking things people do on Facebook. But he should do them in moderation, and with the knowledge of how it affects you. If his constant posting makes you feel jealous, that’s a legitimate feeling that he shouldn’t just brush off. He’s (hopefully) no longer with his ex. Does he constantly go over to her place, look through her photos from her trip to Brazil, and play Scrabble without you there? No? Well, then why should he be doing those things non-stop online? Constant Facebook interaction with an ex is a good sign that he hasn’t fully moved on. 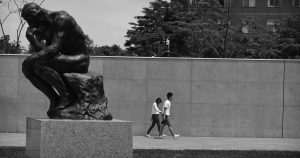 Romantic Gifts for a Tight Budget

Today’s economy has had an effect on nearly everything we do. From the type of home we live in all the way to the kind of gifts we give, our budget seems to be like an overbearing tyrant that dictates what we can do. The good news is there are ways to work with a […]

There are many reasons to expand your social circle. Maybe you want to make new friends; maybe you’re bored and looking for people who share your interests; maybe you want to get laid. In 2016, I had just moved and barely knew anyone. I was bored, lonely and miserable; most of my Fridays were spent […]

6 Things You Shouldn't Say On A First Date

So you’re on your first date with Mr Gorgeous but there’s just no sparks flying. The conversation has fallen flat and the awkward silence is just too uncomfortable. In a desperate attempt to keep the conversation flowing you start jabbering on about the first thing that comes into your head. Big mistake. There are some […]

Women express love their emotions and sharing, while men tend to express love through sex. As animals, the male sex in its most basic form, is strictly there to drop its seed and perpetuate the species. Marriage is not an animal construct, but one of faith and humanity. So apart from the fact that men […]