Five Reasons Not To Move In With Your Boyfriend 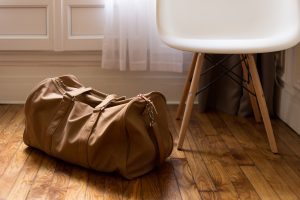 One day you will look at your significant other and think: “Moving in together is the next logical step, right?” And it is. Cohabitating is generally the only way to figure out whether you can stand being together for the rest of your lives. But sometimes, we mistake convenience for love. Here’s how to figure out if you’re rushing it.

5) You Hate Your Roommate

Whether it’s the first apartment away from home, or the first time in a dorm room, one thing you learn quickly is that not everybody can stand living with each other. Roommates hate each other for all sorts of reasons: cleanliness (or painful lack thereof), laziness, painting the cat neon orange and proclaiming him Trogdar of the Martians, all valid reasons for mutual loathing and disgust. So, yeah, if you can’t stand your roomie, you should move out. But that doesn’t automatically mean your boyfriend should move in. After all, he could be a terrible roomie, except instead of breaking a lease to escape, you’ll have to break a heart. Ask yourself if you could live in his place at the absolute worst that you’ve seen it, because it’s generally a lot worse.

4) You Can’t Afford Your Rent

This one is unfortunately pretty common, these days. Whether through job loss, increased cost of living, or pulling a Carrie Bradshaw and spending $40,000 on shoes (this is one of many, many reasons men run far away from women who admire her, just by the way), a lot of us are in apartments that are draining us dry. But do you really want to move in with your boyfriend solely because you’re broke? Think about the precedent that establishes, especially the dynamic in your relationship. Finances are murder on relationships, especially if one member of the relationship is increasingly finding him or herself to be using the other’s wallet as a crutch. Better to find a cheaper place you can afford than enter into a sugar-daddy relationship.

3) A Roommate Suddenly Moves Out

There are actually scenarios where this is A-OK, believe it or not. In my current relationship, my girlfriend and I were planning to move in together last August. Through a series of events that were not the fault of either of us, her roommate moved a few thousand miles away in a Civic and I wound up moving in around May. But the key thing is: we were already planning on moving in together, and had laid the groundwork, had the discussions, and so on. If you haven’t, you’re in trouble. Moving in together takes some degree of emotional readiness and a whole hell of a lot of planning. It’s not just getting your stuff in there; it’s deciding what of your stuff to get rid of, how your stuff is going to fit together, who’s going to do what chores, and who’s going to pay for what. With no plan, you’ll find yourself in each other’s face, winging it on crucial decisions, and generally stressed out when you shouldn’t be.

It’s the classic reason…and it’s terrible. Sure, you think you spend all your time at your boyfriend’s place, but you don’t. You go to work. You hang out with friends. Sometimes you have to take care of something at home. The point is: you each have your own space. And you’re probably not cleaning up his place after you leave. “I’m there all the time anyway” is a great reason to ask for some closet space or a drawer or some place to keep stuff when you stay over: it’s not an invitation to move in. Living together is rewarding, but it’s also not fun 100% of the time, unlike staying over at your boyfriend’s on a regular basis. Just something to consider.

Our brains are wired to commit to our decisions and to cling to them with slightly more grip that a rabid wolverine with steel teeth. We hate, right down to the core structures of our brain, being wrong. And that’s especially true in relationships. If you ever wonder why the reaction of so many people to relationship problems is just to commit further to that person…well, now you know. Moving in together isn’t going to solve your problems. Talking about your problems will solve your problems. It is, in fact, the only way to solve your problems. You should know what’s working, and what isn’t, before you ever sign a lease. Oh, one more thing: drive the U-Haul yourself. That way, if you break something, nobody feels bad.

4 Signs That She’s Down to Get Down After the Date!
archives most recent
More from Beliefnet and our partners
previous posts