11 Things That Will Turn A Guy Off In Bed 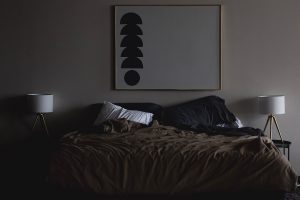 Ok, so you’ve been dating your guy for a bit and you have a hunch the two of you are about to get nekkid, perhaps even on your next date. First of all, congrats — sex is fun. You’ll enjoy it. But it’s easy to take a wrong turn in the sack, so whether this is your first, fifth or fiftieth time doing the horizontal bop, remember these few simple rules for keeping things light and lively. These apply to you, too, guys, so pay attention.

1) Don’t mention any other sex partner. Ever.

“Touch me there. Oh yeah, that’s it. My ex used to do that.” It’s like he’s suddenly there with us. Instant limp-on.

You did tequila shots all night and now you’re ripping each others’ clothes off. Fine, unless you can’t hold your liquor. Once in college I was making out with this young lady after a party at which we’d both consumed copious amounts of alcohol. Things were getting hot and heavy when suddenly she looked at me, smiled, and said, “Hang on,” then turned her head and puked all over my floor. Maybe it was my kissing, I thought, until she wiped her mouth and was ready to go some more. Uh, no.

My friend Deb dated a guy who was a bodybuilder, so the first time they got naked, she was shocked at his lack of equipment. It caught her so off guard that she did the unthinkable: she laughed. Just a little laugh, and then she caught herself, but it was too late. The guy got pissed and left. She felt terrible. The lesson here? Guys can be sensitive about their junk, even guys who are hung, so the first time you’re about to get it on, be ready for an anaconda, a garden snake or anything in-between.

Two weeks ago my buddy Tom said he and his wife were doing the deed when he caught her looking over his shoulder watching TV. “Why the hell did you have the TV on?” I asked. “I dunno,” he said. “It just was.” Oy. You can’t really blame his wife — Conan was on. But we all want a bed partner who’s in the moment, so if you want a good sex session, get rid of all distractions before getting busy. In other words, Tivo that shit.

Yo, you still with me or did you fall asleep? Yes, I realize that if you aren’t making any noise, I’m probably doing something wrong. Or maybe you’re just the quiet type. Either way, it’s a drag. If it doesn’t feel good, tell me and I’ll try something else. If you never make any noise in the sack, well, that’s your prerogative, but it’s not much fun. They have this new thing now called feedback. You should look into it.

You’ve been working out, haven’t you? I’m glad it feels good, but breathing is kind of a must for me, so could you loosen up the Thighs Of Death a little? Thanks. (For women, the equivalent is when a guy holds your head down there.)

Being vocal and asking for what you want? Good. Barking orders at me like I’m Ben-Hur rowing a Roman warship? Not good. There’s a fine line there. You’ll know it when you find it.

One of my college roomies was making out with a young lady when he suddenly realized her finger was in a certain orifice where he wasn’t expecting company. Some guys like that sort of thing, and some guys don’t. It’s probably best to know which is which before you start digging around.

11) Stopping at the wrong time

How can I say this? When you’re drilling for oil and the oil starts gushing, for god’s sake, don’t stop drilling. That’s the time to drill even faster until the oil stops flowing.

Have fun and good luck.

Photo by Brianna Santellan on Unsplash

Breakup Blues: 5 Things You Can Do Right Now To Feel Better
archives most recent
More from Beliefnet and our partners
previous posts