Return of the “Assad gassed his people” lie?

Who is not sure of his memory should not attempt lying.

The hole in this latest conspiracy theory is that Bashar al-Assad doesn’t have chemical weapons. 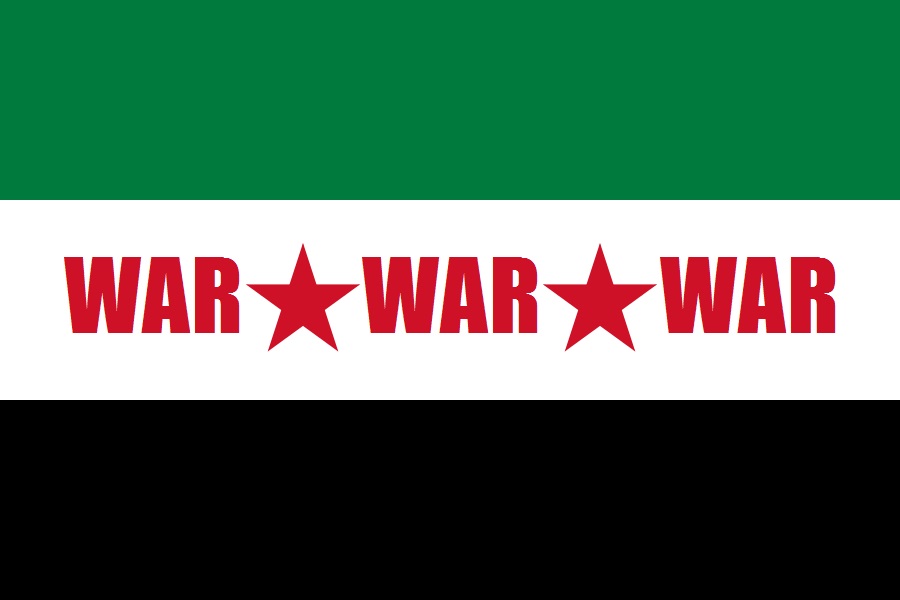 Some people view the only solution to the intractable Syrian conflict as the elimination of Assad. An obsession that started the war in the first place, and if anything is the sole reason it is intractable.

Assad has de facto won the Syrian civil war. The only reason the pathetic “rebel” groups hold any ground is because the lunatic fringe governing US foreign policy is still obsessed with continuing the war. Like Hitler, they simply refuse to accept that the war is lost and that the “rebels” are surrounded, hopeless, clinging to the idea of miracles descending from the sky.

Assad has got everything he needs to win the war and the rebels are fixated on foreign support, obsessed with the idea of the US Air Force coming to save them. To their dismay, the US Air Force is actually too busy bombing them, as it has been conducting airstrikes endlessly for months not against Assad’s armies but against the Islamist militants seeking to remove Assad. The US military, unlike the delusional US political elite, has got no interest in saving Syrian rebels and wants to see them all dead.

As for the Assad chemical weapons crisis, that occurred in 2013. Roughly at the start of that year, Assad’s military was accused by the grand judges, juries and executioners of America that he had tried to gas his people in the East Ghouta pocket – a dwindling pocket of rebel forces near Damascus that is completely surrounded and in a state of absolute hopelessness and despair. You can see it on maps of the present conflict, usually shrinking each month.

It is odd enough that the one place Assad was seen to be “desperate” enough to use chemical weapons was a place where he was winning anyway.

The claim that Assad gassed his own people in 2013 was a lie, a mere proclamation from the US State Department to justify war, exactly like the mere proclamation that Saddam Hussein was building weapons of mass destruction in 2003. It was no secret that the US State Department believes the American people are so stupid that they will fall for the same lie every ten years after forgetting the previous one. It was not known that they believed the American people to have the memory of a fish.

Lying is painful and damaging in the extreme because it entices one to continue to lie in order to save face. US politicians and foreign policy commentators were dragged along by their lies and mistakes in 2013 on Syria, so they kept repeating a lie. They repeat it now, hoping that they will be vindicated by successfully starting a new war.

There is a term for this called the maxim of the Big Lie: the technique used by Hitler and Goebbels, the dictate that if a lie is big enough and is repeated often enough, it is impossible to defy it. People will continue to repeat it, even though they know it is a lie.

Unfortunately for Obama and company, people didn’t buy the lie about Assad gassing his people – and that was back in 2013 when Assad actually was sitting on a tremendous quantity of chemical weapons. The most terrible error in repeating the chemical weapon lie now is that the US personally destroyed Assad’s chemical weapons. Obama made promises that Assad’s chemical weapons would be dealt with. Will he now ruin one of very few promises he ever kept in his entire political career? Will he ruin himself by succumbing to foreign policy hawks who have nothing but contempt for him, and become a puppet of those who in the first place consider him inept?

Indeed, for the US to go back to repeating the lie that Assad is gassing his people now, which the government has wisely not chosen to do yet, would ironically humiliate Obama and serve to reassure no-one about his wisdom. He was the one who promised to have eliminated Syria’s chemical weapons. Were the State Department now to revert back to 2013 talking points and the old case for war against Syria despite the elimination of the chemical threat, once again based on hearsay and rumor, it would be bumbling, idiotic and hypocritical of them.

For the dull media and certain Twitter users to dig up a worthless turd of a news story from 2013 that was never widely believed in the first place and run with it like some kind of magical talisman that will win the war for them in 2015, should have made them a laughing stock.

Those who assert Assad gassed his own people every day – every single day since the lie first appeared in 2013 despite it falling on deaf ears – expose their mentality. They are each depraved liars and sore losers who will invent any pretext to end the war in Syria on those terms. The end they have in mind is what happened in Libya – a gungho US-led war based on sketchy evidence that eventually leads to Western leaders posing in the war-torn country with terrorists, dirt-bags and dictators while claiming that democracy has been served, before promptly evacuating their staff from the country and leaving it to drown in its own blood as the civil war continues.

The goal to get rid of Assad has nothing to do with ending the war and simply cannot produce that result. It is an attempt to prevent the war from ending with a rebel defeat – something that can and should happen. Insisting that Assad must go simply ensures that Syria will be doomed to an endless cycle of war. War, war, war. That’s all the Syrian so-called rebels talk about and all that they understand, and it is why they have blocked every attempt at a negotiated settlement to the war on the constant threat that they won’t stop the bloodshed unless they come to power. They will continue to hold the country hostage, beg for Americans to bomb their country for them, and get everyone killed until their appetite for power has been satisfied.

"Black Pride" vs. "White Pride"?
archives most recent
More from Beliefnet and our partners
previous posts