I have an oversize Tarot deck, a Rider Waite, and have decided to pull a card for myself each morning as part of my spiritual practice. I’ll be doing this for learning but also to get a heads-up about my day. This morning I drew the Queen of Cups.

She who is content in the water. She who is content to feel. She who feels. She feels and she knows. I looked on line for a Google image to post on my Facebook and found a gorgeous one from a deck that I do not have that appealed to me far more than the Rider Waite or any that I’ve seen so far. (The image here is from the Tarot de Marseille.)

Rather than the RW throne woman, this Queen of Cups is standing at the water’s edge, dipping a toe in, wearing robes, a cape, a hood, looks like some kind of ritual. We can see her throne behind her. I love that she’s gotten up. She’s holding her cup which looks full of the moon. I thought, at first, that she was holding a crystal ball.

So this Queen is up to something witchy. She’s active. She’s not just being. She has a moonlight job to do. Being is not enough when you see her.

Also on Facebook I’ve been talking about my Uranus transit which was most certainly evidenced by my repeat seeing of the Tower card recently (which I blogged about) and for once, perhaps, the Tower meant “thought forms falling” more than the Tower meant crisis. Tower as internal revolution and changing of the inner guard.

But about the Queen of Cups: is this the moment after the fall? You walk to the water to thank the Gods for assisting you during your confusion and dark day?

Now you don’t have to have a Uranus transit (“expect the unexpected”) to change your life or your outlook, but it sure does help. Uranus = the energy that is most hard to predict because Uranus seeks freedom for us. Like a gift. My teacher used to say: are you going to go kicking and screaming or…

So the Queen of Cups is at the shore line with her chalice and her words and we must assume the timing is perfect, that she has studied the correspondences and the ways of the ancestors for maximum magic which reminds me of Uranus actually — Uranus the Awakener, the Pioneer. Yes I know we don’t usually envision the Cups Queen this way but that’s the beauty of Tarot interpretation. We add our own. The card image speaks to us and the story begins to tell itself. 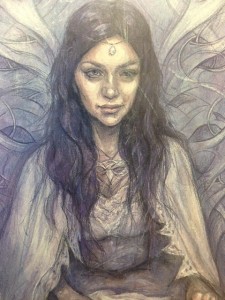 Are You The Queen of Swords?
archives most recent
More from Beliefnet and our partners
previous posts