Empress Has New Moon Advice For You 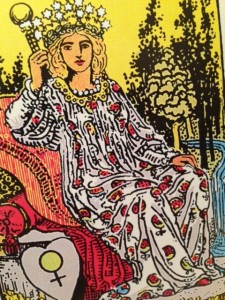 The New Moon is the dark time. What we know is hidden.

I wrote those words last night, before the New Moon. It’s Saturday afternoon as I type this and many of us have “set intentions,” as is our habit. We have stated our desire to the heavens and we hope to stake a claim.

Today I was going to take the day off, but a client called me spur of the moment (I make room when I can) so we talked and I found myself trying to convince her that SHE matters. That she exists. What I mean is… this prevalent notion that all of us who are single don’t quite exist now and that we are waiting to exist later, once we are partnered up.

My point being: please don’t wait to live. It takes a tremendous amount of energy, all that waiting and hoping. LIVE instead.

This gal I was talking to is an Aries, a mega mega Aries! And the New Moon was in Aries so I believe she can hit the ground running but of course free will exists and she gets to decide what matters and where to focus her finite infinite energy — not me.

I am going to draw a card for her now and I draw Empress. Passionate She of the Cushiony Throne and what always to me looks like a watermelon gown although I think they are pomegranates. All around her are fertile trees and streams and yellow bright sky. Mother of so so much.

See, you are Empress no matter what. No matter what man (or partner). That doesn’t change. 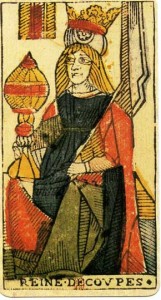 Queen of Cups: Moonlight Job
archives most recent
More from Beliefnet and our partners
previous posts