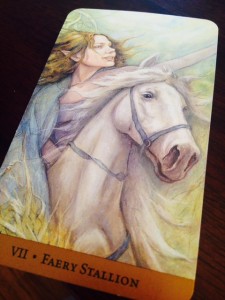 The Faery Stallion: The Chariot! She looks triumphant, doesn’t she?

The Moon is Void of Course as I type this which means, among other things, it’s been a bit bizarre, chaotic, and uncomfortable for me, and it’s not always that way but a “usual” Taurus Moon is steady.

The Moon is “resting” when she’s void. Can be hard to get things done or to know what to do. We can’t “read” her like we usually do. She’s not quite the Taurus Moon we know and love but for sure she’s not Gemini. We’re not supposed to initiate new projects or plans under the void Moon although we are during a first quarter moon so wait until tomorrow morning, Tuesday.

A card for the pause, a card for the cause, one Eclipse has come and gone and a fiercer one’s a-coming, the Full Moon variety, March 4th, emotional, in Libra, representing the scales, balance, fairness, and justice, IMPOSSIBLE (I say) due to the Uranus Pluto square squeezing that pretty Libra Moon ’til her insides fuss out.

No balance, no fairness, no justice. What will we have instead?

Let’s draw a card for that 😉 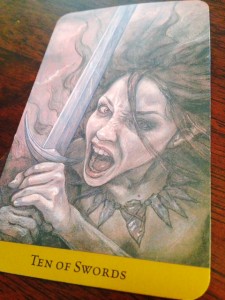 I am relying more on my intuition these days with my new deck, Tarot of the Hidden Realm (and disregarding traditional meanings at times) and what I want to say is this: it looks like an intense battle to me and at first we’re smiling, we’re riding, we’re waving, we’re young, our hair is blowing in the breeze, good times.

But there will come a time, there will absolutely come a time when we have to step down from the horse, grip our sword and not prepare to fight but FIGHT. I feel tired just looking at this card. Or maybe I was this annoyed this morning when the door bell rang and the cat was frightened and my roommate was yelling and I was indisposed and… it was a mess.

And yet this card feels like more than an inconvenience so I’ll ask the Tarot what the hell it’s about, what do we need to know:

Okay. Whew. Calm down everyone. You know what this is? This is an EMOTIONAL release. Eight of Cups. And let me try to find the words here because it’s the magnitude of this release that’s… hard for me to articulate. 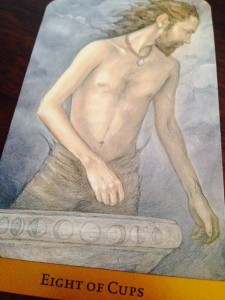 Basically it’s time to walk away. There may be a literal walking away (bye!) or just that throwing-up-your-hands feeling, giving up. DONE. And it’s absolutely the right thing to do. 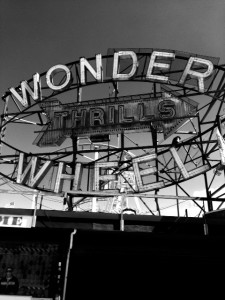