The Page of Swords: AGAIN!

I kept picking the same cards, the same cards I’ve been seeing lately. Page of Swords? AGAIN? I don’t wanna! But then came the revelation which I described in a YouTube video the other day. Detach in the sense of rising above it. Cutting through intense emotions. Letting go.

I hadn’t even been posting on YouTube lately until yesterday I did a short video: Today’s Astrological Warning 😉 and then I did one today as well. Little vids. To the point. What the moon was up to and then a card.

And yesterday was a Page of Swords day. Today too.

There was a time, about a year ago, or a bit more, when I kept seeing this card. Saturn is retrograde now, heading back to my third house of writing and communications and siblings and short trips (all the astrological houses have various associations) and today I did speak to my sister and am probably planning a trip and have put some new attention into old writing projects that I’d left behind. Saturn returns!

Could it be that simple? Sometimes it is. Clarity. The Swords sometimes do refer to writing and communicating, speech, the voice, logical, rational thought, but also, often, conflict. They say the Page of Swords is defensive, wary. The spy. I felt some of that today too.

Something I particularly like about this card, this version of the card, from Tarot of the Hidden Realm, is the way I can’t tell if our young Page is pulling out the sword or putting it back. Maybe it’s obvious to some, but I like the ambiguity. She looks almost sleepy here. Is the battle done?

Now that I think about it, with the Moon in Cancer making all kinds of emotional aspects, it would be wise to put the sword down and away and listen to something higher — inner voice, inner power, freedom from irritating people 😉

I imagined my emotional state was a radio station and I turned it off. Changed the station. That was my Page of Swords moment. One of them. Anything having to do with writing these past couple days I also consider Page of Swords moments. The uncomfortable part is… not feeling like the King of Swords, in charge, but young, a kid with hope, with something to lose.

I can’t end on such a somber note so I draw again. Eight of Pentacles and he doesn’t have that “tinkering” feel that I often feel when I see the Rider Waite card. This Eight is fierce with his tongs and hot coins, examining them, perhaps planning a revision for number nine.

What to make of all this, the repeat images, the return to the past? I’m not entirely sure but I’m not going to draw again. I shall stop here. We want to believe we are going somewhere, step by step, some organization to the journey, and I do believe this and yet, sometimes the clues and keys don’t give us very much and we want answers.

For some reason today though, and yesterday, I was fine with that. Fine.

PS New class is forming in April! Here are the details! 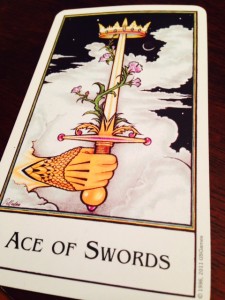 Today's Tarot: Ace of Swords
archives most recent
More from Beliefnet and our partners
previous posts