Today’s Tarot: Knight of Swords (And the Full Moon in Virgo)

Next week we have a Full Moon in Virgo and I know some of my readers are a bit on the witchy side (or more than a bit!) and shall be preparing their altars and spells and Full Moon manifestation and releasing spells in advance of that day, March 5th. They may even get Knight of Swordsy about it, with passion and power and pleasure yes pleasure in the ride, in the hunt. To where are you going, young Knight?

He puts MIND first. He’s our intellectual, logical Knight, happy to debate you and blunt, he will cut you with his Sword which is his mind, his intellect, his logic and yet for me most of all this is Knight of Chase, Knight of Speed, and yes Knight Knowledge of Which He Is Certain m’lady. Sudden. Grasping. Exploring. Red cape, blue sky.

So the Moon is waxing, fattening up, filling out. In the sign of Gemini as I write this, which is also Mercury ruled but what to make of a Full Moon (Full FEELING) in the sign of Virgo, the nurse, the servant, the tightly wound, the personal organizer, healer, kitchen witch, perfectionist, Hermit, do-gooder, give ’til it hurts Virgo maiden. She, also, rescues. She may not hunt except to see who she can help. My Moon sign actually. Since you asked. I LIKE ORDER. I like CLEAN too but I like order even more. I like the bins gone through and the bookshelves dusted and I like living with cats. I think I may be a cat. Mrrr.

Full Moon will trine Pluto this time around which means strong feelings yes but it’s manageable. And creative. Profound. That’s the Pluto part. Adding depth to the wave. The the trine makes it easy to feel. Not painful.

The Full Moon is you coming out of hiding and the Knight of Swords is similarly unashamed and yet… VIRGO, who rules not shame but the untainted. You know what I think? I think Virgo lets down her hair this Full Moon. I think Virgo says what she wants and wants what she says and that Sword in her hand isn’t a weapon of sharp talk (she can be so very critical) or rabid advice-giving but, instead, slicing and dicing through her own small daily agony — and without shame. She need not learn it.

Sing to it. Dance to it. Embrace this Full Moon. That’s my Virgo Moon suggestion for you. 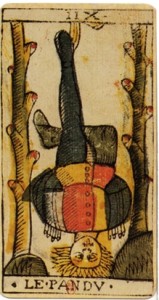 Today's Tarot: The Hanged Man
archives most recent
More from Beliefnet and our partners
previous posts