On Seeing The Ten Of Wands 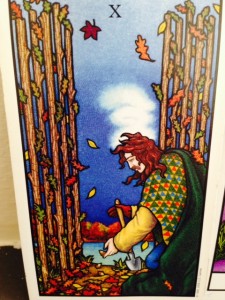 We were talking about NUMBERS today in the Tarot class. During the first week I had asked folks to list cards that vexed them and everyone, I think, listed a Major Arcana. Even the Star got a mention. I get it. Sometimes the happy dappy do cards can vex us. The World used to do that to me.

And today a gal brought up the Seven of Pentacles — which then led to a hearty discussion of the Seven, Eight, Nine, and Ten of Wands. How painful these cards are (to me, overall). I brought up the Six of Wands. A card of success! Which is then followed by the Seven — Crowley called it “valor” — and yet it depicts a man fighting. He is FEELING fought. Sure he’s strong but EVERYONE IS AGAINST HIM!

And then the Eight: news travels fast. You obviously won the battle of the Seven. But then comes the Nine, the Wounded Warrior. He’s weary but he lives to fight another day. Sigh.

The same gal brought up a point from Rachel Pollack then — how we have to leave the Coleman images behind  at times because half the Wands suit, the FIRE suit, cannot only, merely, be oppression and exhaustion.

I said: I wish there were an 11 of Wands — so we can see him putting down his burden. Sitting down by the fire. Roast a marshmallow or two. And yes it does alternate. The Six and Eight are far more chipper than the Seven, Nine, and Ten and yet…

The Seven is mystical and wise. The Eight is regenerative. The Nine is alone. And the Ten is complete. Perfection.

You must rest when you see the Ten of Wands. You must rest. Lay your heavy burden down. See, whatever the burden is… I feel its totality with this card, the Ten, but that you are adding to it. You are adding to the burden in some way, physically or metaphysically. And that is what you must release. Like a bird in a cage. Open up the cage. Let the bird go. The bird wants to go.

*
P.S. Are you interested in receiving a personal Tarot/Astrology reading from me? My September Back to School Special is on! To learn more please visit MoonPlutoAstrology. Click here to get in touch.