What’s Next For Sandra Oh? 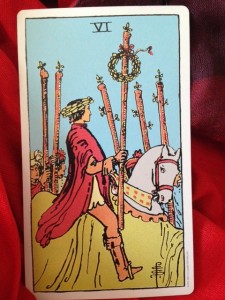 If you’re a Grey’s Anatomy fan then no doubt you’ve already heard the news: Sandra Oh, who plays Christina Yang, is leaving the show.

Grey’s Anatomy fans worldwide mourn this news! I know I am. Thursday’s episode made me cry those bittersweet Grey’s tears. These characters are my FRIENDS. I’ve been with the show since the beginning. I’ve changed apartments FIVE times since it started (which is more indicative of my astrology transits than my television habits but that’s another story for another time).

At first, I was going to draw cards for this amazing actress: What’s Next for Sandra Oh? But then I realized that Oh wasn’t the one who needed Tarot guidance, but Cristina’s fictional best friend, Meredith Grey! Where will she be without her person?

Friendship also matters, and as Shonda Rhimes has said many times (I’m paraphrasing here): Derek may be the man she loves, but Cristina is her soulmate.

When considering the loss of a person, whether by distance here on earth or by death, we wonder how we will survive without them. I decided to ask the cards a few questions.

–what did Meredith gain from her friendship with Cristina
–how did the friendship change Meredith
–what will the future hold without her best friend nearby?

Cristina helped lift Meredith out of her “dark and twisty” despair. Interesting that in real life, Ellen Pompeo is a Scorpio, and her character has that same depth and breadth and intensity. Cristina didn’t change Meredith’s personality. She didn’t need to change it. She was able to be there with Meredith in her dark and twisty. They did that for each other.

This card particularly reflects Cristina’s speech to Meredith at the end of Thursday’s episode.

“You are a gifted surgeon, with an extraordinary mind. Don’t let what he wants eclipse what you need. He is very dreamy, but he is not the sun. You are.”

Plot-wise, Meredith’s husband has accepted a Big and Important Job thus forcing them to uproot their family, careers, and the only home she’s ever known. At the end of the show, Meredith announces to Derek that she does not want to leave Seattle.

All the Tarot cards have astrological associations, and the World is associated with the planet Saturn. Saturn represents limitation. When we see the World card upright, we don’t feel limited by our limitations! We feel more FREE because the rules allow us to soar. The rules gives us firm foundation so we can rise higher.

But when we see the World reversed? Our structures may be shoddy or we feel stuck or frustrated or delayed despite having the World in our hands. Cristina has always reminded Meredith of who she truly is — gifted and extraordinary.

As for what the future will hold, we see the Queen of Wands, also reversed (and we will address upright vs. reversed cards in a future blog post).

I don’t read this reversed Queen, in this context, as darkly as some of the Tarot books suggest — that an upright Queen of Wands is bold and generous and that reversed she is an unhappy pissed off shrew. I just think  that, for Meredith, her light will temporarily dim. She will miss her friend. The Wands suit is symbolic of the element of FIRE and reversed fire can feel less inspired, less enthusiastic, less bright — or even just overwhelmed, which is likely to happen with her best friend far away in Switzerland and her husband taking a job across the country.

If this were a reading with a real live person, I’d be tempted to draw more cards, in part because of the three reversals, but also because it’s a bit of a bummer reading!

My instincts were correct! The Seven of Cups (upright!) shows its many-splendored face. Once Meredith gets her fire back and once she internalizes that she rightly has a say in her World, she will likely feel less limited and more open to possibility, choices. Sometimes this Tarot Seven brings confusion, but in this case I’m feeling HOPE.

I can’t help it. I have to draw one for Sandra Oh as well and hooray! We see the Six of Wands, a VICTORY card. A parade is being thrown in her honor. The incredible Ms. Oh leaves Grey’s Anatomy in a blaze of glory. She will be missed! I am so glad they didn’t kill her off, but instead let her live out her days as Director of Cardiothoracic Surgery in an office with a gorgeous view and a crack team of researchers at the ready.

Dear Readers, how will YOU survive Cristina’s departure? 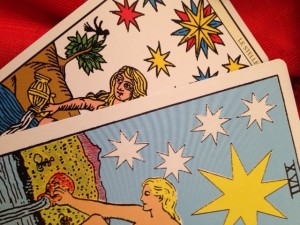 Ask The Oracle: What Do I Need To Know?
archives most recent
More from Beliefnet and our partners
previous posts