How I Learned To Love The Celtic Cross

My teacher wasn’t into it. He preferred the Tree of Life spread. That is, if he had to choose ONE. He didn’t like the one outcome card found in the Celtic Cross, card number ten, but actually, according to a famous Tarot reader who I consulted last December, there is more than one “outcome” in this spread. In fact, there are a few “future oriented” cards so no need to feel trapped if your “outcome” is a bummer.

Last night I decided I wanted to go deeper. I got out one of my books, grabbed cards, went slowly. I wanted to read the explanations of the card positions as I drew from the deck. I wanted to get a sense, if I could, of why THIS SPREAD! The book I was consulting had all sorts of correspondences too — linking the card positions, linking the card layout to other systems such as… astrology, the chakra system and body, the directions North , South, East West but I found that the more details given, the more detached from this spread I became. It all felt very vague. I wasn’t latching on — although I felt drawn to explore the symbolism of the shapes themselves (the two crosses and the staff) and the numbers of the cards.

Remember, every card in Tarot has a number and the numbers have meaning, but there is also another numerological layer: the order in which you lay the cards down. So let’s say you pull Wheel of Fortune as your tenth card, well, the Wheel is also a ten so this becomes another piece to ponder. What also interests me here is reading cards in pairs, making new patterns from a supposedly static spread.

And then through my friend Google, once again, I found websites on the actual Celtic Crosses of Ireland. These sites FINALLY illuminated me to the potential depth and mystery of this spread.

So if you too are looking to connect to the Celtic Cross and don’t know what all the fuss is about, I suggest you put aside your Tarot books and read up on a little Celtic history and wisdom. AND THEN bring that to your readings.

Two beautiful keywords that I found while doing my research: Ascension and Navigation. And that each arm of the cross is a pathway to knowledge. Up, down, left, right. Past, present, possible future. The purpose of the Celtic Cross spread is to be a torch. To give light.

I suggest you do a Celtic Cross for yourself this week and spend time meditating on the first two cards you pull, the heart of the matter, the two center cards, the mini-cross, so to speak. Because from there, right there, from that heart center, your life is blooming, sprouting forth everything else, all the other cards. (Pssst I drew the Four of Wands crossed by the Three of Pentacles.)

Dear Readers, how do you feel about the Celtic Cross? 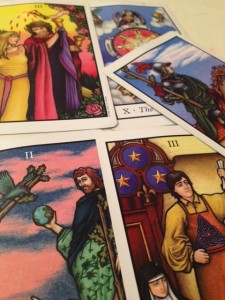