Blake Koch has never been afraid of hard work. And that’s a good thing considering how difficult it is to break into NASCAR—especially when driving for small, underfunded teams.

Over the past six years, Koch has raced in all three major series (Sprint Cup, Nationwide and Camping World Truck) for no less than 15 different owners. But that hasn’t slowed him down from pursuing his dream. More importantly, however, has been his desire to use the NASCAR platform as a way to share the Gospel message of Christ.

In this Inspiring Athletes interview, Koch talks about his relationship with other young Christian drivers within the sport and how he deals with the ups and downs of sponsorship and on-track performance:

Chad Bonham: How important has it been to have a solid support group (guys like Michael McDowell, Trevor Bayne, etc.) to help you get through the uncertainty of the racing business?

Blake Koch: I’ve had a lot of ups and downs. There’s been a lot of growth for me as a driver and spiritually too. I’ve been plugged in with the right group of guys and that started from the beginning. Sometimes it seems like things are going the right way but when I look back I really do love the way everything has happened. Last year looked like it was going to be a great year at the beginning and then everything started falling apart, but through that I developed a great relationship with my team owner and I was able to help lead him to Christ and now he’s going to church with his family. So yeah, when you look at things from a racing standpoint, it’s been a rough couple of years, but spiritually it’s been awesome.

Bonham: Everyone seems to be struggling with sponsorship these days. How do you deal with that element of the sport—especially during the offseason between November and February?

Koch: It’s tough to get that sponsor that’s going to stick with you all through the year. There just aren’t many of them that do that anymore. You have to put smaller deals together—five race deals, 10 race deals, one race deals. After those deals are up you’ve got to do it all over again. I’d love to be in a competitive car every week but just being around the track is a dream come true and a great opportunity. It sure as heck beats working for a living (laughs).

Bonham: What did you learn about the business of racing and yourself in light of the sponsorship controversy (Koch lost a 20-race deal with the Rise Up and Register Campaign when ESPN rejected the sponsor’s advertisements) from 2012?

Koch: It was a crazy time in my life. I don’t really let things bother me too bad so it didn’t seem like that big of a deal. There was an issue with ESPN and we resolved it. I don’t get mad at people. I was just wondering what was going on and what the outcome was going to be. Looking back, the outcome ended up being great for me career wise. I had it easy for a while. I had a sponsor every week. I raced every week with no problems. Then I lost my sponsorship and I had to race my way in every weekend. It taught me how to unload and get up to qualifying trim right away. I had to do that for a year or so. And then when I had the chance to get into a really fast racecar, I was ready. Something like that just prepared me for where I am to and the opportunities that are on the way. So yeah, that was an interesting time in my career. I even got to go on Fox News and I’d never watched Fox News before that. But as long as you speak the truth and say what’s on your heart, you can’t do anything wrong.

Blake Koch is one of several drivers who were interviewed for the book Faith in the Fast Lane: How NASCAR Found Jesus.

Keep up with the latest news about Blake’s racing career by visiting his official website www.blakekoch.com. 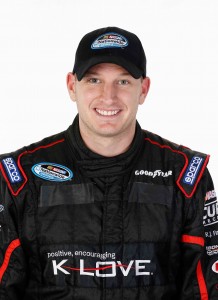