David Boudia (pronounced boh-DIE-uh) qualified for his first international diving competition at the age of 15 and hasn’t looked back since. But at the 2008 Olympics in Beijing, Boudia failed to win a medal in both the individual and synchro events leaving the platform specialist feeling unfulfilled and empty.

Two years later, as a sophomore at Purdue, Boudia “hit the wall” and found new meaning thanks to the evangelistic efforts of his diving coach Adam Soldati. Now in London for the 2012 Olympics, Boudia still wants win that elusive medal but it’s something completely different that’s driving his passion for the sport.

In this Inspiring Athletes interview, Boudia talks about falling in love with the Olympics at a young age, his life changing experience at Purdue and how a newfound eternal perspective has radically transformed his approach to competition:

Bonham: You got your start in gymnastics. Is that typical for most divers?

Boudia: It’s very typical. When I was seven, I had a goal to make it to the Olympic Games. I played a lot of different sports and tried a lot of different things and I thought I’d go in gymnastics. That’s what I put a lot of my focus on. I did soccer and cross country and baseball. I was kind of the average American jock but I lost passion in gymnastics and I found diving, which was the next best thing to feed my adrenaline.

Bonham: What initially drew you to diving?

Boudia: After quitting gymnastics in 2000, I was looking for that next thing where I could defy gravity. I was looking for something that had the flipping and the twisting and allowed me to be acrobatic. A friend introduced me to the sport and I took my first lesson and fell in love with it from there.

Bonham: Who were your inspirations as a diver?

Boudia: There wasn’t specifically a person I looked up to. It was more about the Olympics in general. When I was seven, I was watching with my family and just thought how cool that would be to represent your country. The Olympics is about bringing the world together and learning how to go through struggles. That’s what inspired me before my career and that’s been my inspiration ever since I was striving towards the 2008 Games.

Bonham: So was your first memory of the Olympics the 1996 Games in Atlanta?

Boudia: Yeah, that was the first Olympics that I could grasp and my family was huge Olympics fanatics. Both played into that.

Bonham: When you went to Beijing, did the experience live up to the hype?

Boudia: Don’t get me wrong. It was unbelievable to be in Beijing. But when it was all said and done, I looked back at it and had the experience of my life. It was surreal. But there was still that “wanting more” and I didn’t accomplish my goal. It was almost as if I saw Beijing as a failure even though it had been my lifelong dream to be at the Olympic Games.

Bonham: When did you start synchronized diving and what are some of the different strategies within your preparation and actual competition?

Boudia: When I started diving, that’s when it first came on to the Olympic scene. That was something that my age-group coach emphasized. I trained with my synchro partner (Thomas Finchum) in 2008 probably back in 2003. It was just a matter of getting our mechanics and techniques the same. I count “one-two-three go” and that’s when it just synchs up. But when you’re first starting out, it can be very difficult because you need to have the same techniques. But now it’s like you’re on automatic pilot.

Bonham: Do you enjoy one discipline over the other or is all just diving to you? 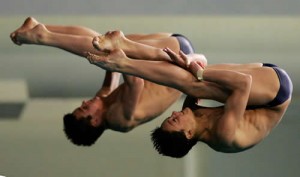 Boudia: I definitely enjoy both. They have two different mindsets. When you’re with a synchro partner, it’s a team. Nick McCrory is my synchro partner now, so when we go into competitions, it’s about enjoying the competition and I get to share that with somebody else. We also get to grow from the competitions where we don’t do so well. Individual diving is more about learning what you’ve done wrong and what you’ve done right in those competitions. They both have their perks and they’re both great to experience when you’re in the moment.

Bonham: Is your attention ever divided during a competition?

Boudia: Ultimately when you have the perspective of why you’re competing and what you’re trying to pursue, the rest just falls into place. I don’t have to change my mindset. It’s still all for one purpose. It’s all about glorifying God. I approach the practices and the competitions the same. I’m at peace when I’m doing those things and it’s for God and His glory.

Bonham: When did you first start to understand who God was and what His purpose was for your life?

Boudia: I was not raised in a home that emphasized faith or emphasized a need for Christ. After 2008, I started my freshman year in college and coming off the Olympic high, I was starting this new journey by myself. I didn’t have my parents around and it was really a rebellious time in my life. It wasn’t until my sophomore year when I realized something was wrong. It was like I hit a wall and I was flat down on my face. I didn’t know what direction I was going. I started texting my coach (Adam Soldati) and he had me over the next night. I had a lot of questions about why I was here and what my purpose was. The Gospel really provided all of those answers and the fulfillment I needed. It’s definitely been a huge 180-degree change. It’s a hard walk, but I definitely don’t imagine it any other way.

Bonham: Did you know that Coach Soldati was a believer and is that what drew you to him during your struggle?

Boudia: I didn’t know what a believer was or what that even meant when I came to him. I just knew that Adam was someone I looked up to and I didn’t know why. He just provided me with a lot of wisdom. He was someone I could turn to and ask those tough questions. He was real approachable and loving. That’s why I felt like I could come to him during that time.

Bonham: Was that a freeing moment for you and how did it impact your diving?

Boudia: It definitely was a freeing moment. It probably wasn’t until about a year ago when I started to understand my purpose. I started reading scriptures about what it meant to live for God’s glory. Competition started to look a lot different. Competition is all about you. It’s about feeding your selfish needs. It feeds the depravity of your heart. You start to worry about what happens if you don’t win. You start to fear man because you want praise from man. You start thinking about how winning will lead to more money. There are a lot of sin issues inside of that. So now when I go into competition, I have to take my thoughts captive and use God’s Word to fight that battle. It’s totally freeing when I stay in tune with scripture. I don’t have to worry if I miss a dive. I go into competition and it’s like, “Praise God no matter what.” If I do well, that’s awesome. I praise Him. If I don’t do well, praise Him even more. Competition looks way different now.

Bonham: What have you plugged into that’s helped you grow spiritually?

Boudia: I was brought up in a Catholic church. It was more like I was keeping up an appearance and that’s contradictory to what God’s Word says. So I got plugged into a church body and I’ve dived into being around like-minded people that worship Jesus. That’s when I started to see a lot of growth in my life and from there I got involved in a fellowship group. That’s been a big part of the change in my life since my sophomore year.

Bonham: How long did it take for you to get comfortable with the responsibility that comes with being a Christian who also happens to be in the public eye?

Boudia: At first, I had a lot of fear of man. What would my friends think of me if I started talking about Jesus more? I really wanted to please Him but I also wanted the praise from my friends. It probably wasn’t until I really started to dive into God’s Word that I realized that this life is a speck of what eternity looks like. If I want to post something that God’s sharing with me on Twitter, then what is my fear of doing that revealing in my heart? Am I searching to please God or am I searching to please man? It probably was about a year and a half ago when I started gradually doing it but now my number one purpose in life is to please God and to love on others. I do that through social media. I do that in practice around my teammates. It stems from learning more about God’s attributes.

Bonham: Diving is one of those sports that people love to watch during the Olympics but sometimes forget about the rest of the time. How important is it for you to maximize the opportunity to not only share your sport with the masses but also shine a light for Christ?

Boudia: In 2008, diving was my god. It was a forced competition. I needed to do well there if I wanted to do well later in life. But for this Olympics, I’m enjoying every moment, day by day because tomorrow’s not guaranteed. It’s more about what I’m doing to share my purpose but not forcing it on people. God is providing this platform so He can reveal Himself. Hopefully the sport will get more attention this year and hopefully God will get more attention out of the Olympics as well.

A conversation with U.S. Olympic gold medalist Dawn Harper
archives most recent
More from Beliefnet and our partners
previous posts