Scot Byrd says his Bible survived a January house fire that destroyed his home in what he is calling a miracle.

Byrd, a veteran who lived in the home for more than 20 years, says he lost everything in the fire, but the Bible his grandfather gave him, somehow, was still intact.

“The fireman actually came out [of the home] with tears in his eyes and he said you’re not going to believe this you’ve gotta come to see it for yourself,” Byrd said. “This bible did not have one scorch mark on it.”

Byrd believes it was a sign from God that the hardships following his family will be resolved. One of his daughters, Shelby, was diagnosed with a rare form of leukemia in 2014. She has since beat the disease.

Since the January fire, several community organizations and businesses have donated clothes, school supplies and beds for Byrd and his daughters.

“We don’t give up,” Byrd said. “We’ve had an outpouring from the community if I went to name everyone [who’s helped] by name I would be here for two hours.” 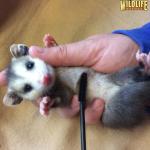