While driving to work, a Florida man noticed a cloud formation that eerily resembled a firefighter running toward and angel.

Matt Snow, a school teacher from the Jacksonville area, snapped the photo on the 18th anniversary of the 2001 terror attacks, saying it looked like “a firefighter running with a hose and an angel with the sun perfectly behind it” in a Facebook post. He added the hashtags “Never Forget” and “Patriot Day”.

Since posting it, the image quickly went viral. Snow estimated that it received over 20,000 likes within the first few days of being posted by news outlets, and it even got a share from politician Mike Huckabee.

The comments also came pouring in, with some saying they believe the angel could also be a bald eagle. Snow was incredibly honored to see how many lives the post touched.

“The comments have been some of the most genuine emotions you can imagine. From instantly crying, to goosebumps, to having a community get-together talking about it. I hoped that a few of my friends would see it and be reminded that GOD is in control and He has a plan, no matter if we understand it or not. We have to trust in Him even on our darkest days because He is there for us. I never would have guessed it would go viral in our country nor across the globe.” he later edited into his Facebook post.

Snow told Fox35 Orlando that he did a double-take when he saw the striking vision that day.

“I couldn’t believe what I just saw. My wife and I are both teachers and we drive that road every morning with our kids,” he said. “Out of all days, today it looked like that.”

Of the law enforcement officers and first responders who died on 9/11, 343 of them were firefighters.

“We had a very strong sense we would lose firefighters and that we were in deep trouble,” Peter Hayden, of the Fire Department of New York, told the 9/11 Commission. “But we had estimates of 25,000 to 50,000 civilians, and we had to try to rescue them.” 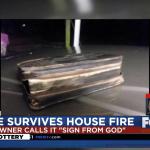