Doug Kiker walked into his American Idol audition with no previous experience in performing or any knowledge or training on vocals. Kiker, a garbage collector from Mobile, Alabama, entered onto the stage with a smile on his face and a hope to inspire his 2 year old daughter that there was nothing she couldn’t do. The 27 year old was met on stage with compassion and patience from co-judges, Katy Perry, Lionel Richie, and Luke Bryan, who were determined to make the audition a memorable one.

“So you have no experience whatsoever?” Lionel Richie asked after embracing Kiker. “I want you to go out right now, warm up, and then you come back and get it together.”

Kiker was unsure of what warming up meant, but Richie ensured him that Ryan Secreast would take him backstage and help get him ready.

After returning onto stage, Kiker confidently belted out Bless the Broken Road by Rascal Flats, and the judges were left beaming.

Luke Bryan then joined Kiker on stage to help showcase more of  the inexperienced singer’s vocals. Bryan began playing the piano, asking Kiker to join in to capture his dynamic range.

“For a man that doesn’t know what his voice can do, for a man who does not have an idea about what key he’s singing in. For a man who has no idea who the heck he can be, he’s here to do one thing; He’s trying to show his daughter that he’s somebody.” Richie said. 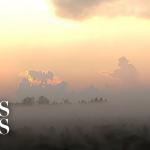 (Conscious) Luck in the Time of Coronavirus

There is nothing lucky about a pandemic. All of us living through the present one can agree it’s frightening, upsetting, and increasingly surreal. Life as we know it has been severely disrupted and promises to remain so for a while. On a purely personal level, people’s experiences vary. For those who love interaction and group […]