UPDATE: We now have the Top 10 Facebook responses to Gamestop’s coupon stealing.

Gamestop regularly makes Satan look good. Just walking into one of their stores to be assaulted by the aggressive staff, intent on shoving magazines and pre-played games and pre-orders for Modern Warfare 18 down your throat, is enough to make me wish for a holiday outing to the bowels of Hades. But this week they’re making His Lord of Heinousness look especially good. 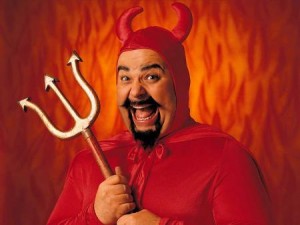 “GameStop tells Gamespy.com that they have been removing the codes for free copies of the OnLive PC version of Deus Ex: Human Revolution from the new PC copies of the game they sell at their stores and selling the game, without the free bonus, as new.”

Um, say what? Letmegetthisstraighmkay? So free stuff in the new Deux Ex, i.e. coupons to play the game using the PC service OnLive, have been physically removed from the game by Gamestop employees, and then the games have been bundled up and sold as if they were new, untarnished products. Yes, Gamestop? Did I get all this straight?

The company reached out to its fans (aka brutalized victims) on its Facebook page with the following message:

“Regarding the Deus Ex OnLive Codes: GameStop’s policy is that we do not promote competitive services without a formal partnership. Square Enix packed a competitor’s coupon within the PC version of Deus Ex: Human Revolution without our prior knowledge and we did pull these coupons. While the new products may be opened, we fully guarantee the condition of the discs to be new. If you find this to not be the case, please contact the store where the game was purchased and they will further assist.”

What I love about this response is that they’re not even trying to spin this in a “we really do care about our customers” sort of way. Seriously – what other business could get away with something like this? What if Best Buy opened up all of its televisions and removed the remote controls because they had their own proprietary remote control that they insisted on selling to you instead? Or what if your supermarket opened up that cake baking kit and removed the icing because they wanted you to buy their icing instead? “Trust us. Even though the cake mix appears to have been opened, we PROMISE that we didn’t spit in it. CROSS OUR HEARTS.”

Bravo, Gamestop. You made Satan look good this week.