5 Religious Experiences With the Super Nintendo

Yesterday was a great day – the 20th anniversary of the Super Nintendo.  The 16-bit behemoth dominated the ’90s, only being touched by the (also awesome) Sega Genesis.  The SNES still houses some of the greatest games of all time, and it’s best games have art that is still unrivaled today.

The Super Nintendo, like the NES before it, had a lot of games that got censored on their way to America.  Mortal Kombat, you might remember, had it’s signature blood replaced with sweat.  It wasn’t just violence and alcohol though, religious references were removed as well.  This included crosses, statues, references to God, and really anything that you might think of as being remotely religious.  As usual, there were things that slipped through the cracks, but there were also whole games that didn’t even make it over due to their content.

This list is a lot of different things – great games, terrible games, and games that never saw a release in America.  But, all important in the dual realms of Super Nintendo and religion. 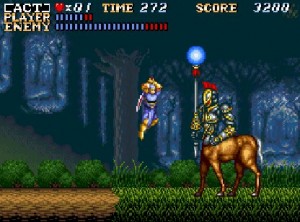 Actraiser – Actraiser is one part Castlevania, one part Civilization, and all parts awesome.  As the plot goes, Satan has come up from the nether-regions to reek havoc on Earth.  What a jerk!  Naturally, you, AKA God, have to become a human in order to slay the mess out of Satan and his demons.  In America, this awesome plot was changed to something less religious-ey, but it’s still pretty obvious what is going on since your vehicle of choice is a floating heavenly palace and you spend a lot of the game helping the little humans have better lives.  The themes of this game were also expressed in other games by the same company, including the excellent, yet non-American released, Terranigma.

Super 3D Noah’s Ark – Okay, this isn’t awesome in a “what a great game!” sort of way, but instead in a “oh my gosh I can’t believe this exists” kind of way.  The game is basically a skinned update to Wolfenstein 3-D, right down to the often identical levels.  Instead of shooting dogs and Nazis, you get to throw food at the animals who are attacking you.  The whole thing is pretty surreal, especially if you grew up on Wolf 3-D.  The game wasn’t licensed by Nintendo so the company had to build a special cartridge to bypass the SNES’s security protection.  I guess breaking the rules is all good if you are making a Christian game.

Majyuuou – This late era Super Famicom game, like the NES game Holy Diver before it, had very little chance of getting out of Japan in the age of censorship.  The plot is insane: Abel’s family is sacrificed by his former friend so that Lucifer can come back to life.  So, what is Abel to do but get super sweet demon powers and go into the bowels of hell with all guns blazing?  I know that we can never know too much about what Hell really is, but if it is anything like this game depicts it then it is full of elevators, huge eyeball plants, crumbling cities, and gigantic teeth.  It doesn’t sound very appealing, but the action in this game certainly is.

E.V.O.: Search for Eden – While the game may have “Eden” in the title, it’s main significance in the realm of religion comes from its subject matter.  The plot of the game is simple – you start out as a fish in the sea, and with each new world you evolve into something new.  Sometimes, you might become a fish with a wing, or a dinosaur, all depending on what you do in the game’s side scrolling action stages.  The ultimate goal is – you guessed it – to become a human!  While the game is unique and interesting, it didn’t fair too well on the Super NES and became a cult hit later especially in the emulation scene.  While maybe a stretch, I am willing to attribute this to parents largely being uncomfortable with the idea of evolution in the cultural and religious climate of the ’90s.  Those same kids though still saw the game in their copies of Nintendo Power, and may have managed to bring some attention to it as they grew up.  No matter the reason for its relative lack of success, it is an interesting game and maybe the strangest endorsement of evolution yet. 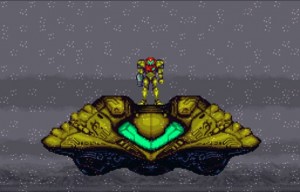 Super Metroid – You are probably wondering what Super Metroid has to do with religion.  Not much, I wager, but I can tell you that I had a religious experience while playing this game.  In my estimation there isn’t a 2-D game more immersive than Super Metroid.  I remember exploring the planet for the first time, finding all of the interconnected passageways, being blown away when I discovered the ruins from the first Metroid game, working my way back to the ship, and discovering the many secrets of the planet Zebes.  There are few video game experiences that feel so perfect that I would come close to calling them divine, but Super Metroid is that Super NES title for me.