Bible Stories That Demand to be Video Games 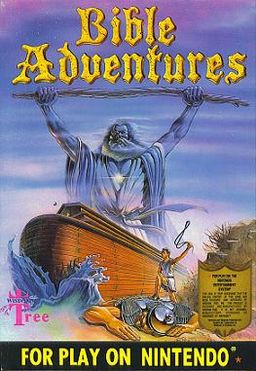 When trawling through the Good Book for game ideas, developers have typically chosen the absolute worst options available to them. Case in point, Bible Adventures, where the player must carry baby Moses to the end of the level. Booooooooring. I had this game as a child, undoubtedly because my parents thought that as long as I was spending hours playing video games I could at least be reading scripture at the same time. Just an FYI, parents, kids can see through that stuff a mile away. Don’t give your kids Christian replacement entertainment unless it’s actually GOOD.

But on to the subject at hand. There are some awesome Biblical stories tailor-made for the world of video games. Christian developers, this is a freebie on me. You can thank me later. Preferably with free video games. 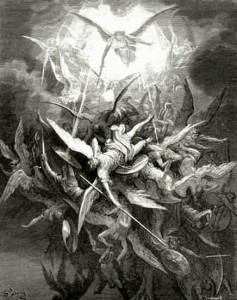 This one says RTS all over it. And because the Bible has little to say about what angels actually look like or do, the subject is ripe for creative license. You could have different units, arch-angels, giant angels, angel lightning, etc., not to mention what you could come up with for the demon player. In fact, the more I write about this, the more I want to play it.

2. The Fall of Jericho – Stealth/Action 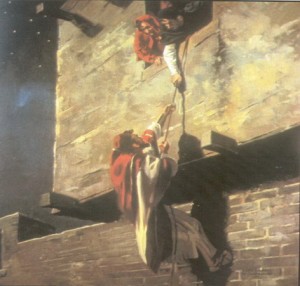 Joshua 2:1
Then Joshua son of Nun secretly sent two spies from Shittim. “Go, look over the land,” he said, “especially Jericho.” So they went and entered the house of a prostitute named Rahab and stayed there.

I’m not talking about the famous march around the city 7 times while blowing trumpets with this one. While extremely cinematic, I’m not sure that scenario really lends itself well to a video game (press A to keep walking…. press A to keep walking… press X to turn left…. press A to keep walking…press Y to blow horns). No, I’m talking about all the espionage and infiltration that went on before hand. Joshua sent spies to infiltrate the city itself and determine its strength, and that lends itself to all kinds of awesome stealth type gameplay. Again, the Biblical account could be expanded to include all sorts of missions. Think Metal Gear Solid meets Assassin’s Creed meets Biblical epic.

39Then Pharaoh said to Joseph, “Since God has shown you all this, there is none so discerning and wise as you are. 40 You shall be over my house, and all my people shall order themselves as you command. Only as regards the throne will I be greater than you.” 41And Pharaoh said to Joseph, “See, I have set you over all the land of Egypt.” 42Then Pharaoh took his signet ring from his hand and put it on Joseph’s hand, and clothed him in garments of fine linen and put a gold chain about his neck.

The story of Joseph is one of the most cinematic in the entire Bible, but most accounts focus on the early betrayal by his brothers, when he was sold into slavery, and his ultimate act of forgiveness years later when they came begging to him for food. The years in between when he rose to prominence as ruler of Egypt is not mentioned very often. This would make a killer civilization building game. Build up Egypt’s industry, agriculture, arts, etc., and be rewarded by Pharaoh based on how well you do. Oops, the famine showed up and you didn’t plan well enough! Now everyone’s starving and you’re about to be executed. Good stuff.

The story of King David is beyond epic. From the slaying of Goliath when he was a boy, to fleeing for his life from Saul and living in caves, to the battles he waged alongside the Canaanites, to ultimately becoming King of Israel, to his infidelity with Bathsheba, to the betrayal of his son and the resulting wars that followed, the story of David would make for a killer RPG. The story would be scripted enough to stay true to the Biblical account, but there would be enough leeway to go in a number of different directions. Perhaps you want David to be the ultimate warrior, so you buff his strength stats. Or perhaps you’d rather he be a shrewd diplomat, so you increase his bartering skills. There would be plenty of combat as well as empire building. You’d watch him grow from a boy into an old man, dictating the direction he took along the way. This game would be awesome! 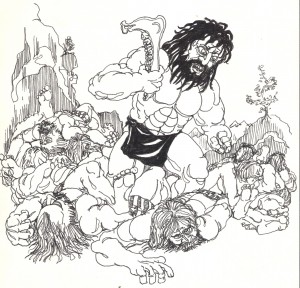 So the Philistines went up and burned her and her father to death. 7 Samson said to them, “Since you’ve acted like this, I swear that I won’t stop until I get my revenge on you.” 8 He attacked them viciously and slaughtered many of them.

Think God of War in Biblical times. Samson goes on vengeful rampage after vengeful rampage, killing hundreds if not thousands of Philistines. You could string combos together and perfect the ultimate killing attack when you get a hold of the jawbone of an ass. Yeah, this would be pretty awesome.

El Shaddai: Ascension of the Metatron Looks Weird, Biblical, and Awesome
archives most recent
More from Beliefnet and our partners
previous posts