If you’re in your late twenties like me then you might remember watching your older brother beat Metroid (it was way too hard for you).  You might also remember the shock of finding out that your awesome action hero had in fact – been a girl.  It was shocking, and a little bit disgusting.  You might also remember not thinking the game was as awesome anymore, while your older brother tried to figure out how to make the space heroine scour the planet surface without the suit on.  Oh, 8-bit love.

Little did we know that the space suit wearing sci-fi heroine would go on to become one of gaming’s greatest icons.  The main reason was her rad suit and arsenal of gadgets/weapons.  But the other reasons are shockingly Biblical.  That’s right, you heard me.  King Solomon in Proverbs 31 talks about the perfect wife, and as you’ll come to find out, Solomon must have boarded a time machine and played Metroid on the NES.

1. “She sees that her trading is profitable.”

Samus does a lot of trading.  She trades bullets for life pellets, and she trades missiles for… more missiles.  Of course she normally kills something in the process, but hey, that’s life!

She doesn’t even need a lamp, because she’s got that sweet flashlight on her gun to reveal secret stuff.  Amazing.  This is one area where Samus own the Proverbs 31 wife hands down. 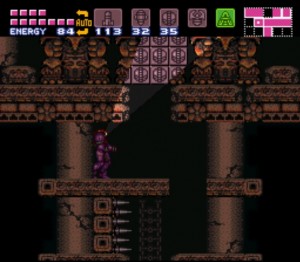 3. “She Does not eat the bread of idleness.”

So far as I can tell, Samus never eats anything, so she definitely wouldn’t eat this “bread of idleness.”  You know what she would eat?  Metroids.

4. “She is clothed in fine linen and purple”

I am bit of a Biblical scholar, and I can tell you that the ancient Hebrew for “fine linen” translates easily into “Varia Suit.”  You can bet your ten sheckles that Jesus wore one – it was super hot in Nazareth.  And well purple, that one is just too obvious.

5. “Her arms are strong for her tasks”

No one can doubt this one.  How many people have you seen use a grappling hook to fly across the surface of a plenet?  And man, it must be heavy carrying 999 missiles by the end of the game, I mean mission.  Trading and wearing linen gets mega heavy.

I could keep going, but I am pretty sure you can see by now that this is air tight.  It is quite clear that “Many women do noble things, but Samus surpasses them all.”  Too bad she is already in a committed relationship.

WVGWJP? (What Video Games Would Jesus Play?)
archives most recent
More from Beliefnet and our partners
previous posts