What’s on Your Food? 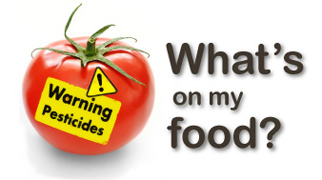 If you’re interested in which foods have the most or least pesticides, check out the new What’s On My Food? database created by the Pesticide Action Network. (PAN).

It requires a little bit of number-sorting, but it’s really helpful, especially if you’re trying to track down particular pesticide concentrations in particular foods. They break down the presence of chemicals like suspected hormone disruptors to known carcinogens. You can check out everything from almonds to winter squash and see stats for conventional versus organic (the sad state of our food system is that even organics have some chemical nasties due to wind, water, and dust–though MUCH smaller amounts than sprayed foods).

The point of the site is not to add more fear to how we eat (though that may be a temporary side-effect). But it’s rather to encourage citizens like us to go one step further than buying organic–to lobby our representatives and support grassroots wok to get our pesticide regulation system looking a little more like the European Union’s “precautionary principle.” As PAN writes, “Since the Environmental Protection Agency (E.P.A.) regulates most chemicals on a chemical-by-chemical basis, the combined and cumulative effects of a mixture of pesticides are nearly impossible for them to address – and so they usually don’t.”

The site has links for various ways you can get involved and take action to be a better “food citizen.”

Fresh Morning: How to Flip an Egg
archives most recent
More from Beliefnet and our partners
previous posts