In Memory of My Fascinating Grandmother 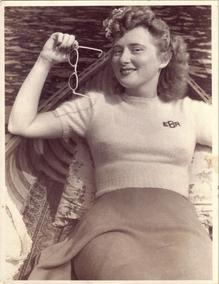 My grandmother Gaga died this weekend–on a Saturday, in fact, just like her husband my grandfather did 13 years ago, and her son my uncle did 2 years ago.  A literary touch, perfect for a larger-than-life woman.

What can any of us ever say to summarize a complex, meaningful, influential life–in her case, a breathtakingly long and full one that lasted just a month shy of 95 years?

If I had to summarize my grandmother in one word, it would be “fascinating.”  She never went skydiving or spelunking or anything else that would signify “fascinating” in the big boffo-socko sense, but to me her very being was fascinating.

Just look at her picture – the drape of her skirt, the sparkle in her eye, the ever-so-casual way she holds her sunglasses.  Isn’t this a woman who should be called “fascinating?”  All of our elders, who live in different times and places, should fascinate us, I think.  I feel like my Gaga was the fascinating-est of them all, but I hope you’re thinking of your fascinating relatives and how much impact they have on your life.

10 fascinating things about my grandmother:

1.  She was the author of two published books in the 1960s. “Doctors to the Great,” was about what we can learn from the physicians of famous historical figures like Alexander the Great and Napoleon.  “Man with a Microscope” was a biography of Elie Metchnikoff, the inventor of–you guessed it–the microscope.

2.  She only gave up writing three years ago, at age 92, and at the time she was working on a historical novel set in George Washington’s Army during the Revolutionary War.  She gave the manuscript to me, and one day I hope to finish it.

3.  I don’t ever remember her baking cookies–she wasn’t that kind of grandmother–but I do remember her making osso bucco stew.  She wore a special hat when she made it, which she thereafter referred to as her “osso bucco hat.”

4.  Her fashion signature was blood-red lipstick.  She once told me she considered it her “red badge of courage,” a symbol of pride and defiance.  She saw my love of home-grown tomatoes–deep, red ones–as that same trait manifesting in me.

5.  During World War II, she worked in New York City for the Office of War Information.  She wrote articles about arts and culture at home and abroad, to be distributed as part of the OWI’s war news publications.  The juxtaposition of art and war always, well, fascinated me.

6.  She was the model of politeness and good manners, except when anyone gave her family a hard time.  I remember her having words with a woman at the condo complex she lived at in Delray Beach, Florida.  As the woman berated me for wearing my hair in braids instead of a bathing cap in the pool, I believe the words, “lay off her, you old bag” passed Gaga’s lips at one point.  I felt like a superhero had come to my rescue.

7.  She traveled to practically every country in the world, though her one regret is that she never visited the Taj Mahal in India.  She and my grandfather took me on my first trip to Europe when I was 10 years old.

8.  How many kids can truthfully say this sentence: “I learned the story of Jesus from my Jewish grandmother.”  On our European trip, she and I sat on a bench outside St. Paul’s cathedral in London and she told me all about John the Baptist and the dancer Salome, the virgin Mary and Mary Magdalene, Jesus’ birth, crucifixion, and resurrection.  It was such a rich story that I not only enjoyed all the paintings we were seeing all the more, I went on to major in religious studies in college.

9.  She used to take my long hair and make it into a mustache on my young face.  “You must pay the rent!” she’d snarl in her best Snidley Whiplash.  She’d take the hair away: “I won’t pay the rent!” she’d squeal in perfect Sarah Bernhardt pitch.  I still giggle thinking about the laughs we shared over that simple bit.

10.  If she had ever gone on Jeopardy, she totally would have won.

Did you have fascinating grandparents?  Stories welcome.  Meanwhile, R.I.P. to the one and only Gaga.

What's on Your Food?
archives most recent
More from Beliefnet and our partners
previous posts