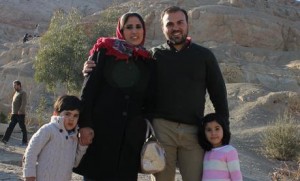 It’s unlike any judicial system in the world. On Monday, American Pastor Saeed Abedini went to court in Iran with his attorney to address charges of attempting to undermine the Iranian government. The real problem: he converted from Islam to Christianity 13 years ago and started working with house-churches in Iran.

Pastor Saeed and his attorney were able to present a strong defense before a Revolutionary Guard Court on Day 1 of his trial before an Iranian judge who has faced sanctions by the European Union because of his harsh sentences for those on trial for exercising a fundamental human right.

But since that first day, it’s been a different story. Pastor Saeed and his attorney were shut out of further proceedings. Not permitted to attend his own trial. We have been told that the court summoned other pastors to testify on Tuesday. We do not yet know what was said in court, but we do know that the Iranian government often uses threats and intimidation to get the testimony it wants.

All of this is happening as Iran tries to implement a media campaign of distortion – releasing false reports that Pastor Saeed is about to be released on bail. The fact is nothing could be further from the truth.

Iran is simply not telling the truth. Pastor Saeed remains in prison. The family repeatedly attempts to arrange bail for Pastor Saeed. And, each time, the request is rejected by Iranian officials.

I want you to know that we are doing all that we can to get the U.S. government to fully engage in Pastor Saeed’s case. Sadly, there’s still silence from the State Department and Secretary of State Clinton. No public call for his immediate release. No condemnation of the imprisonment of this U.S. citizen.

We remain very concerned about the fate of Pastor Saeed. We represent his wife, Naghmeh and their two children, who reside in the United States.   We will continue to bring you updates about what is taking place at Pastor Saeed’s trial.

At the same time, take a moment and add your name to our Petition to Free American Pastor Saeed and encourage our State Department and White House to fully engage this issue to secure the freedom of this U.S. citizen.

More than 225,000 already have signed on to the petition. Add your name now.