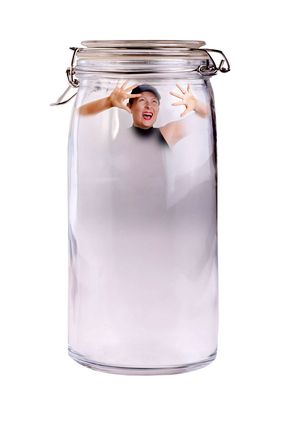 By Mike Bundrant of the iNLP Center for personal development.

You’re driving through a foreign city, feeling a little lost or ungrounded amongst all the unfamiliar scenery….

You somehow feel a little more at home, right?

Next, say you are quickly thumbing through dozens of photos of total strangers. Suddenly, your come across a photo of a close friend amongst all the unfamiliar faces. What happens?

This is your brain on familiarity. Researchers are trying to understand what happens when familiarity occurs vs. unfamiliar experiences. They’re finding powerful evidence that the brain is a familiarity magnet.
Of course, this could be both good and bad. Familiarity can make you feel at home – safe. And it can cause self-sabotage. We’ll discuss that at the end of this post.

Research into the Effects of Familiarity on the Brain

A new study has been conducted by the Center for Neural Basis of Cognition, a joint project between Carnegie Mellon University and the University of Pittsburgh. The intriguing results of the experimental investigation were published online by Nature Neuroscience.

Researchers conducted experiments using animal subjects to evaluate and monitor their responses to a series of images, both familiar and unfamiliar. The images were shown to the animals in quick succession to force an impulse or instinctual response rather than a contemplative response.

The neural responses of the animals were measured by monitoring the inferotemporal cortex. It is this area of the brain that has long been accepted as the connection between the visual intake system and the area responsible for recognizing previously viewed objects.

During the experiment, the brain’s response when the animals viewed an image they had seen before was dramatic. The neurons fired with noticeable strength and in a very specific and immediate acknowledgement of the familiar image.

The researchers conducting the experiment were so taken back by the intensity of the neuron activity in response to familiar images vs. unfamiliar images that they decided to use themselves as human test subjects.

Using an EEG to record their own brain responses, they duplicated the experiment for human use. They soon discovered that the human brain responded in the same manner as the animals, with dramatic reactions to familiar images briefly viewed among the unfamiliar images.
Good and bad consequences of our strong reaction to familiarity:

Familiarity is like a homing device. It goes off in the brain when we perceive something that we’ve gotten used to – something that keeps us on track. This is why the house on your street that you call home prompts a different inner response from you than the other houses on the street. You are intimately familiar with your house. The others are more foreign to you by comparison.

Fortunately, the brain’s reaction to familiarity allows us to create productive patterns in life, feel safe and not have to run around every single day feeling like we don’t belong in the foreign world around us.

But is there a downside to familiarity?

The brain’s strong reaction to the familiar vs. the unfamiliar presents a vulnerability.

Because we are drawn toward familiarity, we can get trapped by it.

You long to see more of the world, but sabotage your efforts to expand your horizons, clinging to more familiar surroundings (even though you don’t enjoy them).

You want to meet more interesting people, but feel afraid to venture out of your social comfort zone into the unknown.

You want to give up the unhealthy foods you were raised with, but find yourself returning to them again and again.

You want to be happy, but happiness seems foreign to you, so you avoid it.

Essentially, familiarity can play a self-sabotaging role. People choose familiar misery over foreign happiness as a matter of routine.

Learn about overcoming self-sabotage by watching this free video.