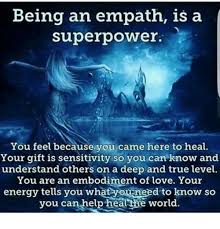 Empaths feel the vibrations of others.

Everything in this world vibrates. That’s because everything is made up of molecules which are constantly in motion. Even if something is solid, its molecules are moving, though you won’t be able to see it with your naked eye.

When a person is angry or sad, that vibrational energy shoots out. The energy actually goes quite a distance. If the energy hits an empath, the empath will suddenly feel angry or sad. That’s because an empath somehow has the biological ability to better tap into energy fields than most people.

Empaths are more spiritual because they are in tune with the universe.

Because an empath is able to feel vibrational energies, an empath usually struggles with keeping a balanced emotional state. The more an empath is around negative people, the more the empath feels those negative energies. It can be quite overwhelming!

As such, most empaths are spiritual people. Spirituality is the process of finding and attuning to your inner self. You are able to shut out negative energies, and feel the real you. You have a connection to something or someone that’s bigger than you or humanity. For an empath, that connection is with the Universe.

Several studies have found that empaths are more spiritual. Spiritual people are more in tune with their inner selves and the world. Having heightened senses and intuition makes an empath prone to depression and anxiety. Imagine being able to ‘feel’ everyone and the world all the time. You have to learn to shut out negative feelings, and not feel down from the horrible things that go on in the world.

Because an empath is able to feel electromagnetic vibrations, the empath needs to learn to protect the space around him or her self. Aura protection, meditation, and tuning in to positive vibrations are techniques an empath should learn. If an empath feels depressed or anxious, its best to get tested. It might only be that the empath is picking up someone else’s emotion and copying it on to his/her self. An empath also needs to spend lots of time alone to recharge.

Empaths have an increased ability to feel the emotions of others around them and are more consciously aware of the world. They are able to feel and interpret people’s emotions and mental states accurately. It’s a unique social-cognitive ability.