Must We Pray for Our “Leaders”?

“I urge, then, first of all, that requests, prayers, intercession and thanksgiving be made for everyone — for kings and those in authority, that we may live peaceful and quiet lives in all godliness and holiness.” (1 Timothy 2:1-2)

Scrolling through Facebook recently, I came across a post criticizing the present U.S. presidential administration, and sure enough, within the comments was one by a Christian well-trained, within our corporate church system, to be docile, compliant, subservient, and deferential to the dictates of men:

“Christians are commanded to PRAY for our leaders, not criticize them!”

(This is the same sort of indoctrinated group thought that advocates public humiliation as an effective form of punishment, extols the virtues of paying prisoners $0.35 per hour to perform work for multi-billion dollar corporations, and insists that “the law is the law,” and no matter how draconian, must be obeyed.)

Generally, the verse in mind is 1 Timothy 2:1-2, so in light of what it says, (which at the outset, it’s important to note, is an “urging” and not a “command”) and a little bit of commonsense, let’s see what our obligations are about praying for our “leaders.”

A Wealth of Leaders

1) We have too many leaders. Politicians are bad enough (although it might be noted that, in “free” countries at least, these “leaders” are supposed to be “public servants” “elected” by the “people”), but legalistic Christians pile them on: teachers, managers, bosses, judges, doctors, bureaucrats, and pastors — misguided Christians who worship authority teach that there are many, many human beings we must obey without question, in addition to pray rich blessings upon.

Those of us who disagree with the false emphasis upon hierarchical command as divine decree can start by getting rid of, mentally, discretionary leaders whom we’re not forced to serve, and any leader in a church — which is optional to attend — comes immediately to mind. Pop culture mass media may identify this name or that as America’s Pastor, but he has no dominion over the souls, minds, loyalty, time, and certainly not money, of God’s sons and daughters.

2) Prayers are to be made for everyone. Unlike men, God does not show favoritism. (Romans 2:11)

3) We are not obligated to pray rich blessings upon people. Man-made leaders, most notably those in politics, finance, business, media, and (does anybody notice this?) religion, generally have more than enough when it comes to material blessings. Perhaps the best prayer for these people is that their material wealth and power not be a hindrance to them, and that, if the best way for them to seek humility, wisdom, and compassion is that those blessings be removed, then may they those blessings be removed.

4) We are not forbidden to criticize people. By very nature of their desire for power, those in leadership are poised to be talked about, excoriated, and brought to account for their actions. Indeed, in political systems which assert people’s freedom to choose their leaders, many promises are made, and it is foolish and shortsighted to not call lawmakers (and interpreters) to answer for those promises. (But Christians are taught not to.)

5) We pray so that those in power do not utterly destroy the world in which we live. “That we may live peaceful and quiet lives,” Paul says. This prolific writer, who lived under a brutal totalitarian regime that called upon its unwilling subjects to worship the emperor as a god, knew that a small bunch of nobodies — advocating the worship of the real God — had no earthly power against a system with no authentic checks or balances. The only real safety for ordinary people were limitations upon their leaders’ ability to inflict damage.

So how do we pray for our political leaders? How about this:

“Dear Father, we pray for those who have the power to affect many lives with their actions. Do not let them enter into temptation, and strengthen their minds and hearts against the promise of money or power, in exchange for the decisions that they make.

“For those who say that they know You (and there are many of these), call them to obey Your words to love one another. Bring them to a state of humbleness and humility. Guard them from foolishness, greed, selfishness, pride, and a misguided desire to bask in the accolades of men.

“If they have been compromised by unwise decisions, give them the wisdom and strength they need to walk the path set before them, and protect those who are innocent.

“For those who do not know you (including and most especially those who claim that they do), stay their hand, frustrate their plans, bring to ruin the structures and the webs that they create. Bring into the light the deeds that they do in darkness, and open the eyes of the nation’s people to see these deeds, understand the evil, and be awake to any lies that are being told.

“Awaken your people, God, and open their ears so that they can hear Your call.”

If this makes sense to you, then please pass it on.

Thank you for joining me at Commonsense Christianity. People who call themselves Christians must stop blindly accepting, promoting, believing, and obeying everything that they are told. Test the spirits (1 John 4:1), and do not follow those who are not from God. 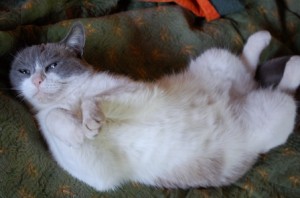 Fat Cat Christians -- Why Do We Keep Feeding Them?
archives most recent
More from Beliefnet and our partners
previous posts