Why Standing up for Yourself — at Church — Is So Important

Just how obedient are Christians expected to be — and who expects them to be this way?

In recent posts, I’ve been discussing Christian submission toward leadership (Must We Obey Church Authorities? and Is It So Bad to Be a Lone Wolf Christian?), and you can’t bring up that topic without someone putting forth Hebrews 13: 17:

“Obey your leaders and submit to their authority. They keep watch over you as men who must give an account. Obey them so that their work will be a a joy, not a burden, for that would be of no advantage to you.”

The study notes below helpfully explain,

“Dictatorial leadership is not condoned by this command, but respect for authority, orderliness and discipline in the church are taught throughout the New Testament.”

This reminds me of the statement I regularly run into:

“Jesus talked more about hell than He ever did about love,” and my response is the same:

Whenever we get into discussions about authority, it’s always good to remember Acts 6: 28-29, in which the apostles Peter and John are questioned by the Sanhedrin:

“‘We gave you strict orders not to teach in this name,’ he (the high priest) said. ‘Yet you have filled Jerusalem with your teaching and are determined to make us guilty of this man’s blood.’

“Peter and the other apostles replied, ‘We must obey God rather than men!'”

The apostles were standing before the church leadership of their day, and by the mandates under which many 21st century Christians operate, they should not have answered thus. Their job was to submit, and obey.

Obviously, it’s not as inflexible as this. Hebrews 13: 17 aside, it behooves each and every believer to think clearly and ask questions before they submit their minds, souls, bodies, and beliefs to another man — who is supposed to be “keeping watch” for the sheep’s good, incidentally, and “must give an account” someday for that watching.

In the country where I live, the United States, attending church is a voluntary activity, an important thing to bear in mind when somebody demands that we submit to the leadership of the place where we choose to spend our Sundays: we don’t have to be there, you know.

If more people accepted this observation, there would be fewer articles about pastors bullying their congregation, or followers drinking Kool-Ade.

While it is not a bad thing to respect people with learning and wisdom, or accept a certain hierarchy in the name of orderliness and structure, overdoing this attitude results in a cowed populace, a people who do not argue with what they are told, an obedient community that is easily led astray when its leaders aren’t genuinely “keeping watch” and don’t need to “give an account” to anybody.

Recently, I ran across a fifth-grade writing test that, in ostensibly teaching students how to use the possessive apostrophe, was actually inculcating much, much more:

Problem 5: The commands of government officials must be obeyed by all,

with the “correct” answer being,

The government’s commands must be obeyed by all.

Other sentences instruct that the president “makes sure the laws of the country are fair,” and, “The wants of an individual are less important than the well-being of the nation.”

Another hand-out given to children taught,

“Rights are special privileges that the government gives you,”

which looks very different from the sentence in the Declaration of Independence, the one affirming that, “all men are created equal, that they are endowed by their Creator with certain unalienable Rights, that among these are Life, Liberty and the pursuit of Happiness,” but this wasn’t mentioned in the hand-out.

It’s not socially aberrant or evidence of anarchist intentions to be very, very uncomfortable with the sentiments in Problem 5 — before or after the apostrophe — but alarmingly, many Christians would have no issues with it, because they are so conditioned to the concept that obedience, submission, and deference to authority are the primary obligations of a believer.

And this is why it’s so important to question, analyze, and, when necessary, resist authority — within the church — because it’s an excellent training ground in creating a citizenry that will obey, just as well, outside of the church.

“If you love me, you will obey what I command,” Jesus tells his disciples in John 14: 15, and it’s interesting to note that in three Gospels, one of the things He commands is a variation on Luke 22: 25-26:

“Jesus said to them, ‘The kings of the Gentiles lord it over them; and those who exercise authority over them call themselves Benefactors.

One of the best ways these deceivers can strengthen their message is by convincing believers that they are required to listen to, and obey it.

Thank you for joining me at Commonsense Christianity. I read a great line in a book once that said, “I have enough confidence in my own intellectual ability to not hand it over to another.”

When Mighty Church Leaders Fall, Do They Crush the People Underneath? 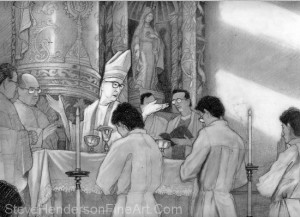 Must We Obey Church Authorities?
archives most recent
More from Beliefnet and our partners
previous posts