Must We Obey Church Authorities?

Obedience, subservience to authority, submission, docility, accountability — these concepts are so prominent, and so interwoven within many Christian circles, that you’d think they were the foundation upon which Christ taught.

In other words, a good Christian does what he or she is told.

“Jesus was passive,” someone told me the other day, “and He taught His followers to be the same.” My speaker was expressing frustration with contemporary Christians, and Christianity, and while I agree with his assessment that followers are actively taught to be passive, I disagree that it is Christ who gives them this message.

Men say this, and they’ve been saying it for a long time.

Agnes Grey is a novel by Anne Bronte, the youngest of the three Bronte sisters (think Emily, and Wuthering Heights; and Charlotte, with Jane Eyre), that follows a young woman as she serves as governess to a series of horrendously atrocious children. Like her sisters, Anne made observations about the religious — Christian — environment of her day, and this passage describes her character Agnes’s assessment of the local rector, or pastor:

“His favourite subjects were church discipline, rites and ceremonies, apostolic succession, the duty of reverence and obedience to the clergy, the atrocious criminality of dissent, the absolute necessity of observing all the forms of godliness, the reprehensible presumption of individuals who attempted to think for themselves in matters connected with religion, or to be guided by their own interpretations of Scripture . . . supporting his maxims and exhortations throughout with quotations from the Fathers: with whom he appeared to be far better acquainted than with the Apostles and Evangelists, and whose importance he seemed to consider at least equal to theirs.”

Published in 1847, this paragraph — so contemporaneous that it’s astonishing — is a sober awakening that the pressure to conform, obey, comply, acquiesce, and passively accept what we are told has been around a long time, and the message of 167 years ago is still being preached today, in Jesus’s name.

A friend sent me an article about Christine Weick, an outspoken, seemingly ordinary Christian, who crashed an ecumenical-fest at the National Cathedral in Washington, D.C., which was sponsoring a joint Islamic call to prayer in the Protestant, Episcopalian church. According to the article, leadership determined that sending prayers up to Allah from a Christian church would show the world that two different religions could “approach the same God” as one body of believers.

Making her way through multiple levels of armed security (how interesting — civil police in a religious setting; it reminds me of Christ before Pilate), Weick stood in front long enough to make this speech:

“Jesus Christ died on that cross. He is the reason we are to worship only Him. Jesus Christ is our Lord and Savior . . . We have built . . .  allowed you your mosques in this country. Why don’t you worship in your mosques and leave our churches alone?”

Where Is the Diversity?

It’s a good question: why are we — no, not we, but leaders in establishment churches — so adamant about blurring significant discrepancies in our belief systems and pretending that they don’t exist, as opposed to truly allowing us to  “celebrate our differences”? As I mentioned to a reader recently, demanding to know whether or not I would vote to protect “homosexual rights,”  we don’t have to agree with one another to get along, and indeed, forcing one person to acquiesce to the beliefs of another, discounts and disparages the conscience of the first.

Most sensible — ordinary — people know enough to cheerfully agree to disagree, focusing upon what we do share in common, but self-appointed world religious leadership, in its push for “ecumenical unity,” chooses to ignore commonsense, with the plausibly obvious result that the people, the masses, the sheep, the laity, the non-leadership, will be upset, resulting in less unity, not more. Leadership is not too stupid to realize this; the question is — are we too stupid to understand that we are being played?

Weick’s civil disobedience, lauded in the likes of Martin Luther King, is not so honored when it comes from the mouth of an ordinary person, speaking up and out, but this is what Christians — through Christ — are commanded to do:

“Teacher,” some Pharisees in a crowd once said to Jesus, “Rebuke your disciples!”

Speak Up and Out

Whether or not Weick was correct to crash a private party (it was “invitation only” — how inclusive), she spoke up, and this is something that belief in Christ does not forbid us to do — in the general public, at the church annual meeting, to the pastor directly. Indeed, the interesting thing about speaking up is that, generally, what we say is far more innocuous than the punishment received for saying it.

Jesus experienced this when he responded to the high priest questioning Him about his disciples and his teaching in John 18:19-21:

“‘I have spoken openly to the world,’ Jesus replied. ‘I always taught in synagogues or at the temple, where all the Jews come together. I said nothing in secret. Why question me? Ask those who heard me. Surely they know what I said.”

In response to this speech, “one of the officials nearby struck him in the face. ‘Is this the way you answer the high priest?’ he demanded.”

But such is the arrogance of mankind, that it makes its decrees, and demands that all follow. Men of power are not below twisting and distorting Scripture to their own ends, putting themselves in God’s place and demanding the submission we owe to Him. It is up to each individual Christian to read Scripture, knowing it well enough to identify when it is being misused, and to determine whether or not a man — a pastor, a priest, a vicar, a rector, a Pope, an elder — ever has the right to say, “Obey me!”

Thank you for joining me at Commonsense Christianity where my constant message to fellow Christians is this: Read the Bible for yourself. Pray for wisdom. Trust that God can, and does, teach His children the truth.

What If You’re Too Timid to Be “Bold for Christ”?

The Misfit Christian (If you speak up, this is what you will find yourself to be.) 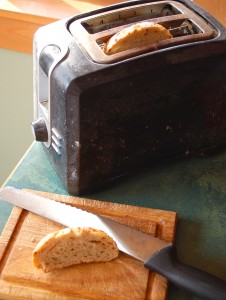