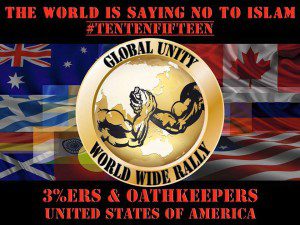 This weekend, there is a planned, armed protest “in every country, at every mosque” by a group called the “Global Rally for Humanity”. So far, the protests are falling short of global, but they do have 21 mosques, community centers and government offices nationwide targeted for the protests, including the famous Mufreesboro mosque in Tennessee. Here’s their snazzy scarevideo that asks “what dose (sic) the Qur’an say about you and your family if you are not Muslim?”

Their facebook page warns that “Humanity is attacked daily by radical Islam” and calls on all self-styled patriots to organize local protests – and there’s the usual overlap with gun ownership radicals, too – the Arizona protest organizer says attendees should “”be vigilant to exercise ALL of your Constitutional rights!” (I’m guessing he doesn’t mean the First Amendment) and the Dearborn protest is being billed as an “OPEN CARRY anti-mosque pro-AMERICA rally”.

“Organizers of the hate rallies have indicated that participants in states with open carry laws may be armed and that provocations such as the use of live pigs and Quran desecrations may occur.

“The anti-Islam rallies come at a time of increased hate-motivated crimes and bias incidents nationwide targeting persons and property associated, or perceived to be associated, with Islam and the American Muslim community.

“Many of these planned rallies may not take place, or they may consist of only a handful of people shouting slurs at worshipers. But given the recent endorsement of Islamophobia by national public figures, it would only be prudent for mosque and community leaders to prepare for any eventuality.”

(note, CAIR also has a mosque security and safety guide that all mosque administrators should read)

The threat is real enough that the Department of Homeland Security is scheduling a conference call today to discuss security measures and precautions, via their Community Engagement team:

The U.S. Department of Homeland Security Office for Civil Rights and Civil Liberties (DHS CRCL) is activating an Incident Community Coordination Team (ICCT) call to discuss protests apparently planned to take place in front of mosques in 20 cities across the country on October 9 and 10. Please join us for the conference call on Tuesday, October 6, 2015 at 3:00 PM EDT (12:00 PM PDT).

Senior leadership from DHS and other federal agencies will join us for the call, including from the Department of Justice Civil Rights Division and other interagency partners.

CRCL has already heard from many of you who have expressed concerns and requested information and points of contact as a result of this issue. The Department of Homeland Security has resources available that communities may leverage for their safety and security. We would like to emphasize that if members of your community have been or may be the targets of possible hate crimes or other forms of violence, it is imperative that you contact your local law enforcement officials right away.

(I’m not sharing the details of how to join in for what I hope are obvious reasons). I am grateful to DHS for taking the threat of rightwing terrorism seriously enough to be proactive in this regard.

why don't they condemn?
archives most recent
More from Beliefnet and our partners
previous posts